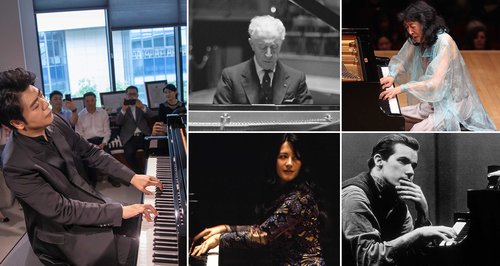 Who are the greatest pianists who’ve ever lived? After much heated debate among Classic FM presenters, this is the list of piano icons they came up with (listed alphabetically).

We asked our Classic FM presenters for their favourite piano icons. Without further ado, here is our list of the greatest pianists of all time.

The brilliant Norwegian pianist has made a name for himself as one of the greatest musicians working today, not least with his recordings of Beethoven’s Piano Concertos with The Mahler Chamber Orchestra. A critic for Gramophone magazine called the series “an extraordinary achievement.”

Read more: The 16 best pieces EVER written for piano

The world woke up to the phenomenal talent of the Argentinian pianist Martha Argerich in 1964 when she won the International Chopin Piano Competition at the age of 24. She is now arguably the greatest living pianist and can sell out concerts in minutes.

Read more: This piano doesn’t have any black keys. How will it sound?

It’s said that this great Chilean pianist could read music before he could read words. It wasn’t long before he was playing works like the virtuosic Transcendental Etudes by Liszt. He’s perhaps best-known for his interpretations of the music of Beethoven. The legendary conductor Colin Davis said of Arrau: “His sound is amazing, and it is entirely his own… His devotion to Liszt is extraordinary. He ennobles that music in a way no one else in the world can.”

Ashkenazy is one of the heavyweights of the classical music world. Having been born in Russia he now holds both Icelandic and Swiss citizenship and is still performing as a pianist and conductor around the world. In 1962 he was a joint winner of the International Tchaikovsky Competition (with John Ogdon, see below) and the following year he left the USSR to live in London.

His vast catalogue of recordings includes the complete piano works of Rachmaninov and Chopin, the complete sonatas of Beethoven, Mozart's piano concertos as well as works by Scriabin, Prokfiev and Brahms. He's worked with all the biggest names of the 20th century including conductors Georg Solti, Zubin Mehta and Bernard Haitink.

We recently asked the great pianist (and now conductor!) to share his advice for pianists.

In 2012, Ban Ki-moon, Haile Gebrselassie and Doreen Lawrence were joined by the Israeli-Argentinian conductor and pianist Daniel Barenboim as they carried the Olympic flag into the London stadium. Barenboim's international fame is now partly down to his work with the West-Eastern Divan Orchestra – which he founded with Edward Said and is made up of musicians from across the Middle East. But he has also produced some of the best recordings ever made and is assured a place in the history books.

“Beethoven’s playing differs so greatly from the usual method of treating the piano, that it seems as if he had struck out an entirely new path for himself.” Those are the words of one of Beethoven’s contemporaries, Carl Ludwig Junker. We may not have any recordings of Beethoven performing, but we have the virtuosic and inventive music he wrote for the piano and accounts from people who heard him play. The man who is now better known as a composer was much admired for his use of legato and the singing tone he was able to produce.

“If I belong to a tradition it is a tradition that makes the masterpiece tell the performer what he should do and not the performer telling the piece what it should be like.” Those are the words of the brilliant Mr Brendel himself. He can turn his hand to music from any period but is particularly respected for his interpretations of Haydn, Mozart, Beethoven, Schubert, Brahms and Liszt.

Poland’s most famous composer was also one of the great piano virtuosos of his day. The vast majority of his work was for solo piano and though there are no recordings of him playing (the earliest sound recordings are from the 1860s), one contemporary said: “One may say that Chopin is the creator of a school of piano and a school of composition. In truth, nothing equals the lightness, the sweetness with which the composer preludes on the piano; moreover nothing may be compared to his works full of originality, distinction and grace.”

If there were ever a pianist who divided classical music fans, Glenn Gould is it. The Canadian pianist is best-known for his performances of the music of J.S. Bach, and particularly The Goldberg Variations. But he's also famous for humming along while he played, performing on a tiny chair which he took to all his concerts and his exacting demands for recording and performing conditions.

Dame Myra Hess, as she eventually became, is famous not so much for winning a scholarship to the Royal Academy of Music at the age of 12, nor of performing with the legendary conductor Sir Thomas Beecham when she was 17 – but for the series of concerts she gave at the National Gallery during WWII. During the war, London’s music venues were closed to avoid mass casualties if any were hit by bombs. Hess had the idea of using the Gallery to host lunchtime concerts. The series ran for six and a half years and Hess herself performed in 150 of them.

There's a strong case to be made for Vladimir Horowitz to be crowned the greatest pianist of all time. He made his debut in 1920 in a solo recital in Kharkiv. In 1925 his fame had grown substantially and he crossed into the West, saying he wished to study with Artur Schnabel in Berlin – but he'd decided to leave for good and had stuffed American and British money into his shoes. He gave his debut in the US in 1928 at Carnegie Hall and he went on to become an American citizen. He is best known for his performances of Romantic works including music by Chopin, Rachmaninov and Schumann.

British pianist Stephen Hough is a consummate soloist and chamber musician, as comfortable playing the showcase-Romantic concertos as a piano quintet or a miniature by Massenet or Ravel. “Hough is one of those keyboard polymaths who’s at home in whatever music he chooses to play,” wrote one critic. Oh and did we mention he also composes and paints? A true Renaissance man.

Lang Lang changed the classical music world forever with his inimitable panache both on and off stage. Thousands of children in China took up the piano in what has become know as ‘the Lang-Lang effect’. So, like his style or not, there’s no denying the impact Lang Lang has had on the classical scene.

Vying with Chopin for the crown of greatest 19th-century-virtuoso was Franz Liszt, the Hungarian composer, teacher and pianist. Among his best known works are his fiendishly difficult Années de pèlerinage, the Piano Sonata in B minor and his Mephisto Waltz. And as a performer his fame was legendary – there was even a word coined for the frenzy he inspired: Lisztomania.

Again, this is not a pianist anyone alive today has had the privilege to hear, but by all accounts – and judging by the piano music Mozart wrote – he could give anyone in this list a run for their money. Just listen to his Piano Concerto No.21 for an idea of what the most famous composer of them all might have sounded like…

Ogdon was part of a new generation of musicians when he studied at the Royal Northern College of Music in Manchester in the 1950s, alongside Harrison Birtwistle, Peter Maxwell Davies and Alexander Goehr. He could play almost anything from sight and famously had an astonishing memory for music. In 1962 he jointly won the International Tchaikovsky Competition with Vladimir Ashkenazy and recorded a huge amount of music by Rachmaninov.

Perahia may have started playing the piano when he was just four but it wasn't until the age of 15 that, he says, he became seriously interested in music. In 1972 he became the first North American to win the Leeds Piano Competition and the following year he worked with Benjamin Britten and Peter Pears at the Aldeburgh Festival. In 1992 a bone abnormality caused his hand to swell and forced him to take some time off from performing. It was during this time that he found solace in the music of J.S. Bach. His Bach recordings are regarded as some of the best ever made.

A Portuguese pianist admired for her interpretations of Chopin, Schubert and Mozart, among many others. A critic in The Times said “she makes you listen to Schubert’s genius with fresh ears.”

She also, clearly has an amazing memory – remember the time she'd prepared the wrong concerto for a concert and just played the right one anyway?

When Pollini won the International Chopin Piano Competition in 1960, Arthur Rubinstein apparently said: “that boy can play the piano better than any of us.” Ever since, Pollini has been steadily building his reputation as one of today's greatest pianists having performed with the likes of conductor Claudio Abbado and the Vienna Philharmonic. In 2010-11 London's Southbank Centre programmed 'the Pollini Project', a series of five concerts of music ranging from Bach to Stockhausen.

Famously, Rachmaninov could comfortably stretch a 13th on the piano (five more notes than an octave) and even a cursory glance at the Etudes and Concertos he wrote makes a convincing case for that fact being true. Happily, recordings survive of this brilliant pianist in action. Arthur Rubinstein said of Rachmaninov: “He had the golden, living tone which comes from the heart.”

One of the many greats battling for the title of best 20th-century pianist, Richter is part of a handful of mighty Russian pianists who emerged in the mid-20th century. He wasn’t a big fan of the recording process, however, so his best albums are recordings of his live performances including those in Amsterdam in 1986, in New York in 1960 and in Leipzig in 1963.

This Polish American pianist is often quoted as the best Chopin performer of all time. He was found to have perfect pitch at the age of two and he made his debut with the Berlin Philharmonic when he was just 13. He was taught by a pianist called Karl Heinrich Barth, who had been a pupil of Liszt, meaning that Rubinstein was part of a formidable pianistic tradition.

One of the few female pianists to compete in the largely male world of 19th-century music, Clara was a superstar of her day. Her talents far outshone those of her composer husband Robert. She wrote her own music as well – you can hear an example in the video below.

One critic of the time said: “The appearance of this artist can be regarded as epoch-making… In her creative hands, the most ordinary passage, the most routine motive acquires a significant meaning, a colour, which only those with the most consummate artistry can give.”

The great pianist Vladimir Horowitz once said he’d heard Thibaudet’s fingers do things his own couldn’t in Liszt’s Faust Waltz. And Horowitz was indisputably one of the greats…

The Japanese-British pianist Mitsuko Uchida was recently made a Dame – demonstrating her vital importance to the music world. She studied in Vienna and gave her first recital in the town when she was just 14. Best known for her performances of Mozart, Beethoven and Chopin she's also made world-class recordings of works by Schubert and, more recently, Schumann.