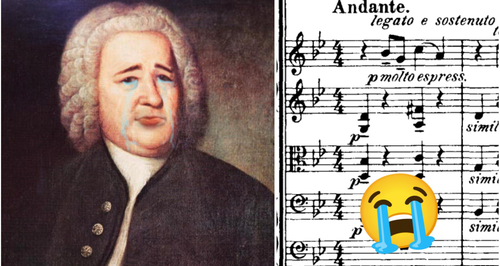 Looking for sad instrumental and vocal music? Here are some of the most beautiful and heart-breaking pieces ever written.

Because this is an opera, someone has to die. Unfortunately for poor Mimi in Puccini's La Boheme, it's her. Not only is she separated from her true love, riven with consumption and hacking into her hanky like an audience member in Who Wants To Be A Millionaire?, she's also decided that Rodolfo is her one true love - here, the two of them reminisce as Mimi meets her tragic end…

It'd be nice to think that the rather more dramatic scene depicted in Amadeus, where Mozart on his death bed blurts out his last ever composition to an eagerly transcribing Salieri, was exactly how it happened. However, it's widely accepted now that it was a rather more sedate affair - Mozart slipped away in the night, and a fellow composer, Franz Sussmayr, assembled the broken fragments and finished it off. Still, it's a deep and devastating listen as one of the greatest geniuses the world has ever known is committed to eternity.

Each of Elgar's 14 Enigma Variations are inspired by one of his friends or family – which perhaps doesn't sound like a sad topic… But the beautiful, moving melody of the ninth variation in the set, 'Nimrod', is a soaring tune that has sadness at its core. Over the years it has struck a chord with audiences looking for a way to express sadness and grief: it's regularly performed at Remembrance Day services, for example.

You might know this one from some of the key scenes in Oliver Stone's less-than-cheery Vietnam epic Platoon. You might also know it from how it makes you want to curl up on the kitchen floor and sob into a dishcloth.

It's a staple here at Classic FM, but to do justice to Albinoni's Adagio you really do have to put your headphones in, imagine life in sepia and feel a full Baroque embrace. Gets us every time.

With a title like that, it's unlikely that you'll be skipping down the street with this pumping from your bluetooth. No, for this Bach we recommend some dark clothing, a stiff drink and possibly some more gentle sobbing. Good luck, everybody.

If any piece deserves the label 'modern classic', it's this. Gorecki used the words etched into the walls of a Gestapo prison by an 18 year old girl during the Second World War as his inspiration, and the results are as chilling as they are moving.

No, it's not an account of the popular late-90s singer's descent into obscurity, it's actually one of Henry Purcell's most poignant compositions. Taken from his opera Dido and Aeneas, it comes as Dido (not that one) is preparing to face her imminent death.

And here's Trevor Pinnock talking about exactly why this piece breaks your heart every.single.time.

Almost everything Tchaikovsky wrote has an element of sadness to it, but this one really takes the biscuit. Dedicated to his nephew, with whom he was controversially in a secret relationship, it is shot through with regret, sadness, resignation and deep loneliness. Listen to the heart-wrenching fourth movement below the pic of Tchaikovsky and his nephew.

Right - to bring you up to speed, Rigoletto's daughter has been stabbed and placed in a bag. Rigoletto has been given said sack thinking it contains the body of his nemesis, The Duke of Mantua. He opens the bag to discover his dying daughter dressed as a man (don't ask) instead, and Verdi makes them sing this heartbreaking duet together as she dies. Blimey.