These are absolutely the best organ pieces in existence 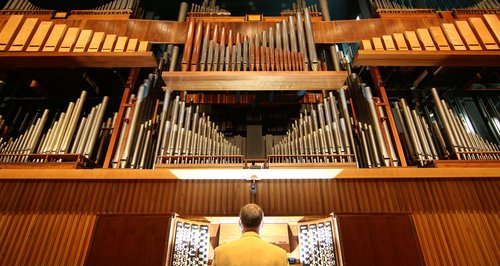 This is the ultimate list of organ music, ranging from powerful symphonies to delicate toccatas.

So it's not *techinically* an organ piece, but this is brilliant – Cameron Carpenter plays the Gigue from JS Bach: French Suite No. 5. His album All you need is Bach is here.

In the mood for a bit more epic organ? Let's go...

Let's start with something loud and brilliant from French organist and composer Jehan Alain. His Litanies begins with a short plainsong phrase before an explosion of harmonic crunchiness. Here's Roger Sayer on the magnificent organ of Temple Church London to give your ear drums a delightful battering:

César Franck: Chorale No. 3 in A minor

If you're after something that *sounds* like a towering cathedral, Franck's chorales are for you. They are absolute masterpieces of the organ repertoire and have all the richness, drama and contrast you could hope for. Incredible stuff...

Let's head back to the Baroque and an era full of richly inventive organ works from the likes of Bach, Buxtehude, Bruhns and many more. We reckon there's an absolute gem from the era, from JS Bach's predecessor at St Thomas' Church Leipzig. Johann Kuhnau wrote a series of musical depictions of bible stories for the organ, and they're just fascinating and charming.

Just take a moment to appreciate that opening chord. Phwoar! Of all powerful entrances, this is truly the one. Even after the orchestra plays a little friendly passage, BAM: the organ is back again, interrupting as if it’s saying “don’t forget about me, I’m the star of the show!”

Charles-Marie Widor - Symphony for Organ No. 5 in F Major - Toccata

Who said organ music had to be dark and menacing? This is the jolliest of organ pieces and will have you toe-tapping in no time. Even after listening to the first minute, you can see (and hear) why this is Widor’s most famous piece.

Considered to be the most famous work in the organ repertoire, it's no surprise there have been several varying analyses of this piece. However, there is no doubt that the opening descending flourishes, followed by the building diminished seventh chord, which finally resolves to a D major chord, is one of the best known passages in classical music.

Inspired by the Christian faith, La Nativité du Seigneur is divided into nine 'meditations' to represent the birth of Jesus. The peaceful opening movements develop into a monumental work, and you can hear that Messiaen sought to capture "the emotion and sincerity first" from his inspirations, as written in the preface of the work.

Premiered at the coronation of King George VI in 1937, unsurprisingly this grand piece has stood the test of time as Walton’s most popular composition. It has since been performed at the coronation of Queen Elizabeth II in 1953 as well as the recessional piece to the wedding of Prince William and Catherine Middleton in 2011.

Poulenc - Concerto for Organ, Timpani and Strings in G minor

Poulenc’s Organ Concerto is one of the most frequently performed pieces of original organ music not written in the Baroque period. Princess Edmond de Polignac originally commissioned the piece to be written as an easy organ piece for her to be able to play herself with a chamber orchestra accompaniment - however, Poulenc quickly dismissed this idea for something a lot more complicated and ambitious.

Edward Elgar - Land of Hope and Glory Pomp and Circumstance Military March No. 1

Known in the USA as the "Graduation March" as it's the most common processional tune at high school and graduation ceremonies, Pomp and Circumstance March No. 1 is also well known for its reception two days after it first premiered in 1901 - it is the only piece in history of the London Promenade Concert in the Queen's Hall, London, to be played for a second encore. Since then, it has grown further in popularity and is one of Elgar's most famous works.

Despite being one of the less well known composers on this list, it would certainly not be complete without Louis Vierne. The partially blind French organist and composer is known for his elegant style of writing, rich harmonies and respect for musical form. His output included six organ symphonies as well as over fifty other works for organ, however the finale to his first organ symphony truly captures his style and massively contributed to the organ symphony genre.

Handel composed a work of six organ concertos for chamber organ and orchestra from 1735-1736 - these organ concertos were the first of their kind and influenced many future composers. They also inspired Handel to write several more, including the Organ Concerto Op. 7 No. 1 in B flat major which is much grander and more majestic than the earlier concertos and unique within the series in that it had an independent pedal part.

Bach's 'Little Fugue' is one of the composer's best-known and most recognisable melodies. This piece simply bursts with enjoyment and we get to savour the first theme for a relatively long time. It is also a reasonably easy and fun piece to play, despite it sounding more complex.