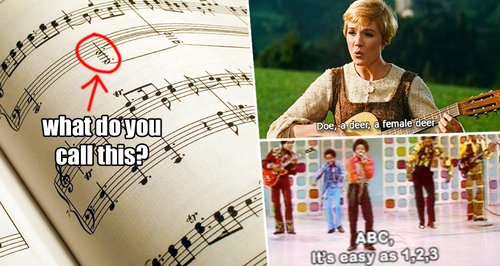 Thought music was a universal language? Think again. Here’s a bit about how music theory works around the world.

When you sing, you begin with Do-Re-Mi

… as Maria from The Sound of Music once told us. But in most English-speaking countries, you don’t, really.

The Do-Re-Mi system (also known as solfège) was invented by Guido D’Arezzo around 1000 AD, and it basically assigns syllables to notes. Following his innovation, musicians over the next few hundred years built on Guido’s system, adding time signatures, note durations and bar lines – find out more here.

If you learn music theory in Italy, Portugal, Spain, France, Romania, Latin America, Greece, Bulgaria, Turkey, Russia, or any Arabic or Persian-speaking country, you’ll use this classification of notes.

However, although solfège is sometimes relevant in vocal music, music theory in countries like the US and UK will teach you to start a musical scale with A, B, C.

This is known as Boethian notation, because a sixth-century philosopher called Boethius had the idea to use letters of the classical Latin alphabet to represent musical notes.

The slight snag here is that Do-Re-Mi is based on the pitches of a C major scale, because with no accidentals, it’s the simplest example of a major scale.

In Germany, Scandinavia and Slavic countries, the note ‘B’ (or ‘Ti’) is called ‘H’, while ‘B flat’ is called ‘B’. There are a few possible reasons for this: the ‘H’ might stand for ‘hart’ (German for ‘hard’) or, it could have just been a mistake in early sheet music, owing to the fact that the B flat symbol (♭) looks a bit like a ‘b’, and the sharp symbol (♯) looks a bit like an ‘H’.

Plus, in Portuguese, the pitch ‘Ti’ (‘B’) can also be called ‘Si’. This can be confusing because it also sounds like the letter ‘C’, but in fact represents a ‘B’.

How about outside of Europe?

In Indian music, the Sanskrit names Sa–Re–Ga–Ma–Pa–Dha–Ni are used, which predate the European ‘solfège’ by hundreds of years. Here are a few more examples of different note alphabets...

Plus, if you learn the Latin system, you’ll come across the tonic (do), supertonic (re), median (mi), subdominant (fa), dominant (so), submediant (la), and leading tone (ti).

There’s the ‘Fixed do’ system, which says that no matter what key the music is in, ‘do’ will always be a ‘C’.

But there’s another way of interpreting Do-Re-Mi which has become popular in the U.S.. The ‘Movable do’ says that ‘do’ will become the tonic of whatever key you’re playing in.

So if the piece is in E flat major, like this lovely Chopin Nocturne, ‘do’ becomes an E flat:

This was suggested by John Curwen in the 19th century, and developed into a full system by Zoltán Kodály in the mid-20th century – which is why it’s often called the Kodály concept.

The names of note durations change from country to country, too.

In the US, note durations are based on the concept that a semibreve is a ‘whole note’ – and everything relates back to that.

Brain feeling a bit fried yet?