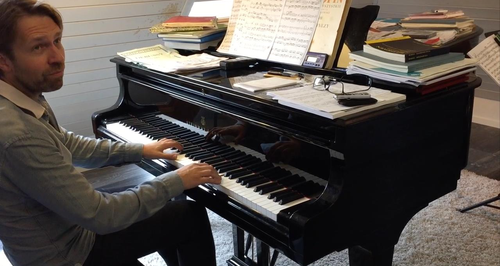 Who would have thought that a volcano in Iceland could disrupt classical musicians’ schedules? But the current flight suspensions have forced many musicians to cancel performances or resort to extreme travel means.

Musicians’ schedules are often planned for months if not years in advance, and now they cannot even make plans for the next few days thanks to the flight chaos across Europe. Here are some of the musicians, orchestras and artists affected...

The Berlin Philharmonic and Simon Rattle managed to reach Krakow to play for the foreign delegations at the state funeral of President Lech Kaczynski – by helicopter. Imagine all of those double basses in a helicopter?

Daniel Hope was stranded in Istanbul on Friday but managed to charter a private plane to Zagreb – still quite a way from Stuttgart though, where he’s due to rehearse with the Stuttgart Radio Symphony Orchestra today.

The English Chamber Orchestra is unsure how it will travel to Spain to begin its tour on Friday and the Philharmonia is still hoping to leave for its Far Eastern tour on 29 April.

The London Symphony Orchestra made it to France this weekend, where they were leading Young Orchestra workshops. Project Manager Craig Thorne writes in their blog: ‘Adding to our frustrations with cancelled flights, the TGV drivers in France were on strike over the weekend and finding suitable trains was like finding hens’ teeth.’ If all goes to plan then they should make it back to the UK on Eurostar tonight. Read the full story in their blog.

Another Classic FM orchestra, the Royal Scottish National Orchestra, had a last minute change of soloist at the weekend, as Steven Osborne, who was unable to reach Carlisle, was replaced by Martin Roscoe for a performance of Mozart’s Piano Concerto No.27.

Pianists were also changing places in Barcelona over the weekend, where Leif Ove Andsnes had been booked for Rachmaninov’s Fourth Piano Concerto. Nikolai Demidenko ended up catching Eurostar to Paris and undergroing the ten-hour drive from Paris to Barcelona to stand in.

The list of those affected is endless: British boys vocal group Libera have been stranded in Italy, Isabelle van Keulen can’t get to the States for a concert in Cincinnati, and Nikita Borisoglebsky can’t get to London to perform Sarasate’s Carmen Fantasy with the London Chamber Orchestra. There have even been several last-minute changes of jury at the Menuhin Competition for young violinists in Oslo.

Amateur groups are also encountering problems, like the St Albans Abbey Girls Choir, whose tour of the US has been rather longer than they planned, and the Arcata High School Madrigal choir, an American group who haven’t yet been able to return home from Italy where they were singing in a music competition.

Are you a stranded musician? Or a prolonged holidaymaker a long way from home? Tell us about your volcano experiences below...