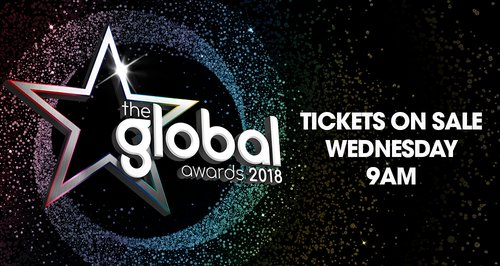 Just announced! Tickets to The Global Awards are going on sale today at 9am (January 24).

Make sure you're ready to get your tickets at 9AM today: party with the biggest stars of music, news and entertainment by visiting The Global Awards website.

A brand new event, on one huge night, The Global Awards will bring together all Global’s radio stations including Capital, Capital XTRA, Heart, Classic FM, Smooth, Radio X, Gold and LBC, with the categories reflecting the music, programmes and news aired on the stations.

The Global Awards will celebrate the biggest and best loved stars of music, news & entertainment in the UK and around the world, across a whole host of genres.

See all the nominees and vote now by downloading the Global Player app and selecting ‘Global Awards’ in the bottom menu or go to vote.global.com

The winners of the first five categories will be determined by public vote, which opens today. They are Best Song, Best Group, Best Male, Best Female and Best British Artist or Group.

The full list of categories has also been revealed:

The first ever star-studded Global Awards show will take place in front of fans and stars alike on March 1st 2018 at London’s Eventim Apollo Hammersmith and promises to be an extraordinary night with performances and special appearances from some of the world’s greatest artists including Sam Smith, Rita Ora, Kasabian, Andrea Bocelli and Martin Garrix.

Ashley Tabor OBE, Global’s Founder & Executive President, said: “We’ve created The Global Awards to celebrate stars of music, news & entertainment in the UK and around the world and we’re delighted to share the details of the categories and the long lists, and open the public vote, today.  Some of the world’s greatest artists, bands and songs have been selected and I can’t wait to see who the public decide to honour on the big night.  Don’t let your favourite artist miss out – get voting now!”

The public vote for The Global Awards is now open!  To vote, download the Global Player app and select ‘Global Awards’ in the bottom menu or go to vote.global.com

Tickets for the event go on sale in January 2018 from global.com/awards.