10 reasons why Oliver! is one of the greatest musicals of all time 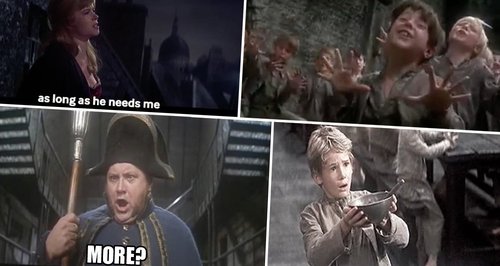 It’s the winning combination of orphans finding happiness, Dickens’ tale of hope in the grotty industrialism of Victorian London, and one heck of a score from Lionel Bart.

1. The opening song is an absolute cracker

Unlike with so many musicals, the big group number that defines Oliver! isn’t a song about Oliver himself. Instead, it’s ‘Food Glorious Food’, an unexpectedly cheery song about the harsh reality of the workhouse boys.

2. Everything is totally amoral, but it’s seen through a child’s eyes

Despite the pickpocketing, robberies and other criminal activities of Fagin’s team, the plot retains a sweet, playful edge to it, because it’s all seen through the eyes of innocent nine-year-old Oliver.

3. Nancy is both a bawdy criminal and a vulnerable girl

Nancy provides vulgar fun and heartfelt ballads in equal measure. One moment, she’s rousing the pub crowd with ‘Oom Pah-Pah’, and the next minute she’s confessing her love for her abusive husband in ‘As Long As He Needs Me’. You can’t help but warm to her

4. Who doesn’t love the Artful Dodger and Oliver’s friendship?

Sure, Jack Dawkins is a pickpocket and a willing pawn in a child gang leader’s game – but he’s a great friend to Oliver, and the lyrics to ‘Consider Yourself’ are really heartfelt.

“There isn’t a lot to spare / Who cares, whatever we’ve got we share”

Charles Dickens’ description of the treatment of orphans in Victorian London is pretty dark, and Lionel Bart doesn’t attempt to soften it – despite his jolly soundtrack. Bar a few small tweaks to the storyline, Oliver remains a nine-year-old boy who is thrown out of an orphanage and threatened with murder.

6. I’d Do Anything is an absolute belter

It starts in a sweet, jaunty major key, and moves unexpectedly into a heartfelt minor on ‘you mean everything’. The song is a mockery of how Nancy and the boys think ‘posh’ people act, but the outcome is an endearing display of how much she and Oliver care for each other.

7. This moment still gives us goosebumps

Oliver is all alone, without a guardian or a friend, and has lost all faith that there could be someone out there who cares for him. ‘Where is Love?’ is a tender ballad from a lonely child, and it unashamedly tugs on our heartstrings.

8. And then, Lionel Bart lifts us back up again

Just as we’re feeling really sorry for Oliver and worried for his safety with Fagin and his child gang, Nancy and co. put on a jolly number about how they don’t mind being in danger, and they’re perfectly happy to drink and be merry in the pub.

OK, it’s a little too much of a coincidence that the kindest character in the musical (Mr Brownlow) ends up being Oliver’s grandfather – but who cares! After all he’s been through, give the kid a break. He deserves this. And at this point, we’re so happy for Oliver that we almost forgive Fagin in his ‘Reviewing the Situation’ Reprise... almost. He’s still a child gang leader.

10. So despite the incredibly grim storyline, we still come away tapping our heels

Sure, Dickens’ story and Bart’s music and lyrics are all about abandoned orphans and child gangs, but once you get ‘Oom Pah Pah’ in your head, it’s not going anywhere fast. Oliver! is proof that sometimes the darkest subject matter makes for the greatest of musicals.

Please, Sir, can we have some more?