A music theory breakdown of Radiohead’s ‘Burn The Witch’ 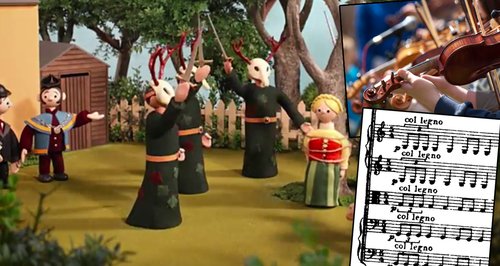 Radiohead are back! *tumbleweed drifts across the world of classical music* OK, fine, aside from arty collaborations with Steve Reich and Jonny Greenwood’s own respected compositional career, the classical music world does not much intersect with the acceptable face of experimental indie rock. But now, there’s this:

If you can, ignore the Trumpton/Camberwick Green/Chigley/Wicker Man video to Radiohead’s surprise new song, ‘Burn The Witch’. Cast the creepy model village rituals and witch-dunking/innocent-burning aside. It is not relevant here. Focus instead on what an incredible little piece of music it is.

First of all, and how often do we get to say this, Jonny Greenwood has elected to use col legno strings from the off. Grab your cheapest bows, everyone, because they’re going to get battered. Seriously, it’s a genius move. If you want to stretch the interpretation, using col legno (bashing the strings with the back of the bow) produces a sound recognisable as strings, but played in a strange, icky and disturbing way. And what could fit the song better?

Here’s what we mean:

And you can also hear it in the opening of Holst’s ‘Mars’ from The Planets:

Once the col legno has settled itself, however, Jonny Greenwood’s string arrangements (we’re assuming it’s him that’s done the arranging) spreads out and becomes slightly more traditional, dare we say predictable, as it mushes itself among the song’s F#, E, B chorus structure. But then, to ratchet the tension further, that col legno (how many times can we write col legno in this article?) returns far higher up the neck of the upper strings.

The more conventional areas of the string arrangement (i.e. the bowed bits) are not without their  intricacies too, however. When Thom Yorke sings “abandon all reason”, there’s a nagging cello mirroring his melody exactly, seemingly divorced from the rest of the string pack. Little details like this show just what an adept and deliberately weird composer Jonny Greenwood is.

As the song works through its second half, the strings appear to gradually disintegrate. The cellos and basses cling tightly onto that chorus chord progression, but above them is comparative chaos. As the Wicker Man-style pyre is lit at the end of the video, the violins become deathly, Herrmann-esque and quite horrid, a neat counterpoint to the comparative conventionality of the song’s structure and melodies.

So while Radiohead are often held up as denizens of doing it differently (for better or worse, eh Spotify?), ‘Burn The Witch’ is them working smart rather than working hard. They’ve set up simple confines, but within them they’ve experimented heavily and made something exceptionally strange, tonally speaking, and inventive to boot. Approved.