A music theory analysis of the new Liam Payne single 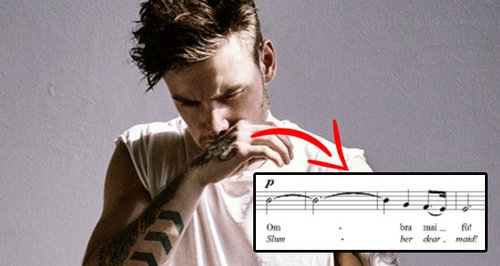 What musical tricks has the ex-1D member got up his sleeve with his third solo single?

Liam Payne has teasingly released the third single from his debut album (name and release date still unknown). Like us, you might conclude that releasing a third track without announcing the full album details would push audiences into feelings of disinterest and irritation. But does ‘Bedroom Floor’ manage to sustain the right level of suspense?

But before we've had time to appreciate the 'vibe', we’re thrown straight into the vocal melody. The first word, ‘baby’ is, granted, unoriginal, but it leads us into familiar Bieber-esque territory. Has Liam developed a sweeter musical edge following his raunchy first single ‘Strip That Down’?

‘You’ve been talking about me lately, telling all your friends how much you hate me’ is the line that follows. This is unmistakably Bieber territory. The confusion around love and affection from the female object and the light emotional torment in the male subject is explicitly reminiscent of ‘Sorry’ and ‘What Do You Mean’.

However, Liam does give a personalised, playful touch to his track with the humorous ‘brr brr’ sound of his iPhone (*ahem* product placement alert). A nod to the extended vocal techniques of Luciano Berio’s ‘Sequenzas’, perhaps?

The steady beat is a real knee-bopper, and the build into the chorus is a moderately exciting introduction into the big singalong section we’re all waiting for.

But then (in what seems to be the pre-chorus), Liam’s soft tenor vocals jump up the octave, to his seemingly comfortable falsetto range. Is it enhanced? Probably, yes. But his youthful vocals comfortably hit the top D flat of the chorus’ repeated A flat major scale (could he nail those clear falsetto vocals in Handel’s ‘Ombra mai fu’?)

We then transition into the chorus, which is essentially the lyric ‘but your clothes say different on my bedroom’, repeated on the tonic, followed by ‘floor’ on a ghost note. Liam, we applaud your subtle but clearly intentional use of Sprechstimme.

The second verse is a similar to the first, as you might expect, but when the chorus lyric is repeated for the third time, Liam punctuates ‘but your clothes say different on my bedroom floor’ with the emotional falsetto-driven line, ‘said it was over’. It's a cunning technoque, thickening the texture of what is a very economical song to stretch its tolerability as far as possible.

Leading into the final chorus, Liam pulls out all the stops to impress his female fans with his high notes. The final ‘baby’ is sung on the fifth of the scale, a top E flat. It’s impressively high for Liam’s range, and gives the final chorus a much-needed twist.

But musically speaking, this is a more positive effort than ‘Strip That Down’, though we can quite plainly see some patterns emerging - those ghost notes (think of “sipping lightly”), hypnotically repetitive vocal patterns, and that reliance on the comfort of his falsetto range.

We wait in anticipation for the live version…

13 cats who will accurately teach you musical terminology

Listen as Israel’s Eurovision singer produces a super-high B6 note, the highest ever in the competition