David Cameron was heard humming a bright but confusing little tune as he re-entered 10 Downing Street. So we wrote it out and analysed it as best we can.

Back in July, after Britain voted to leave the European Union, then-Prime Minister David Cameron was delivering a brief address about the incoming Conservative Party Leader and his replacement, Theresa May, to the media outside his home. But then he hummed. Let’s have a listen to the Prime Minister’s self-composed opus:

.@David_Cameron humming a Winnie-the-Pooh style hum as he says goodbye to the cares of office. pic.twitter.com/kcydnLZBg4

And this is roughly what we think he was humming: 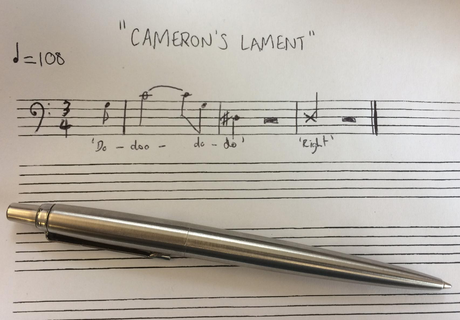 Understandably, the media have jumped on this surprising musical act, but we’ve investigated further.

Let’s start with the time signature. A brisk 3/4, with a crotchet roughly equalling 108 a minute, suggests activity. Positivity, even. But 3/4 is not the most immediately stable of signatures. It’s easy to feel secure in 3/4, but for just a couple of bars it’s disconcerting - especially when starting with an anacrusis.

What does Theresa May's taste in music say about her? >

Harmonically, too, it’s ambivalent, confusing. It’s almost fanfare-like in that confident leap of a fourth from G to C, but it quickly loses confidence when it mirrors the ascent later in the bar, plummeting down to D sharp, forming an awkward implied triad.

And then the percussive spoken ‘Right’, which lands almost perfectly on the first beat of the next bar, is a strange dip into acted-out recitative - demonstrative of a reasonable knowledge of contemporary composition techniques.

There is a theory that the soon-to-be-former PM is actually humming the opening of Shostakovich's Fifth Symphony – of which more here.

So, Wagnerian fanfare, Beethoven-esque harmonic doubt and then a strange contemporary flourish at the end. Does this composition demonstrate the unresolved nature of Cameron’s swift departure from office? Is it perhaps a comment on what might be next for 10 Downing Street?

Other interpretations on this new and invigorating work are welcome. We’re thinking a new fugue arrangement, a cappella choral version, maybe a theme and variations…