What does Theresa May's taste in music say about her? 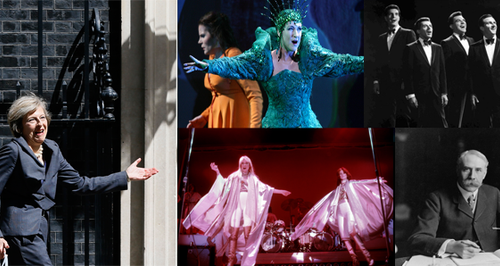 As the UK's new Prime Minister takes the reins, does Theresa May's favourite music give us an insight into her personality?

Mrs. May is known to be a big fan of Elgar’s Cello Concerto. Bold and noble, it always demands a passionate performance. Bodes well for PMQs.

Like the rest of the human race, the new Prime Minister loves Abba’s 1976 hit Dancing Queen. We've no idea about what it'll mean for Brexit negotiations, but this choice could do wonders for her 'one of us' status.

The Queen of the Night's Aria

Back on the classical front, Mrs. May loves the Queen of the Night’s Aria from Mozart’s The Magic Flute with its dizzying top Fs, full of fury and longing for revenge.

Theresa May is also partial to the Rondo from Purcell’s Abdelazer. A rondo is usually made up of a main theme and various ‘digressions’, something she won't be allowed to get away with in the House of Commons (too tenuous?).

After a busy day attending to matters of state, there’s nothing Mrs. May likes more than to listen to this peaceful Gregorian chant (with Larry the Cat on her lap, obvs). It suggests contemplation, peaceful and considered thought. *continues to say nothing*