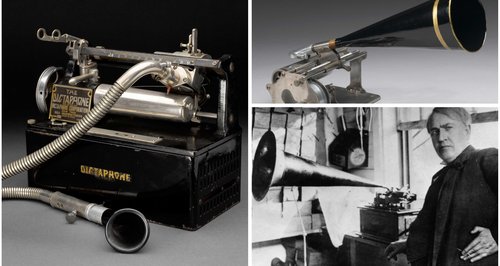 Before the music world had even heard of streaming and downloads, sound recordings were etched onto wax cylinders or even captured by the smoke from an oil lamp. Some of these recordings still exist today…

In 1890 a group of musicians got together in Russia to marvel at some state-of-the-art technology: the Edison phonograph cylinder. Among them were composers Pyotr Ilyich Tchaikovsky and Anton Rubinstein, pianist and conductor Vasily Safonov and music-loving businessman Julius H Block.

And what does he do when faced with this early example of technology that would revolutionise the music world? He does what anyone would: talks rubbish and makes silly noise.

The recording is held at the Tchaikovsky House in Russia – and you can read about our visit to the composer's home here.

1860: the human voice recorded in smoke

The inventor never intended to playback the recording, but one-and-a-half centuries later, the etchings have been deciphered and digitised.

As audio treasures go, this is perhaps one of the most precious available to any music lover. In 1889, the great Johannes Brahms was recorded on a wax cylinder playing one of his Hungarian Dances. There's much debate as to whether the voice heard on the recording is that of Brahms himself, but it's definitely him thundering out his composition on the piano.

This is the earliest recording of music known to exist. In 1888 a recording of Arthur Sullivan's song 'The Lost Chord' was etched onto a phonograph cylinder. Sullivan was astounded at this new technology, but had his reservations too.

The practice of castration was outlawed in Italy in 1870, but luckily/unluckily Alessandro Moreschi made the cut (sorry) and has since become known as 'the last castrato'. He enjoyed a long career and in the 1900s he made a few recordings: however, Moreschi was a bit past his prime when this was captured on wax. But it's a fascinating insight into a now long-lost voice type.