A newspaper editor tore apart While Shepherds Watched, and wrote a ‘corrected’ version 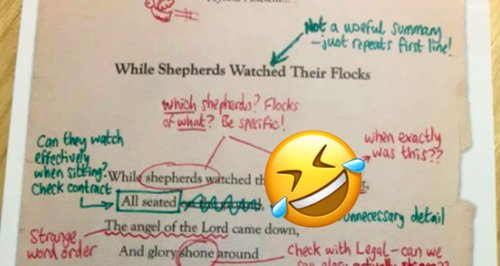 Sub-editors are the pedants of the newspaper world – it’s their job to correct grammar, check facts and flag up legal issues. But it seems like this famous carol never reached their desk. That has now been corrected.

‘While Shepherd Watched Their Flocks’ may be one of the most famous Christmas carols ever written but it seems that, due to some oversight, no one put the text of the carol in front of a sub-editor before it became a festive favourite.

But newspaper editors aren’t the sort of people to let a little thing like hundreds of years of tradition put them off.

One enterprising sub has marked their edits – and come up with a new version. It turns out there were all KINDS of issues with the original:

If sub-editors got hold of #Christmas carols… pic.twitter.com/k76dykLO0E

We’re not sure it’ll catch on…

And here’s a beautiful Christmas carol, untouched by a sub-editor, performed by the wonderful Genesis Sixteen.

We’ve opened the Nation’s Favourite Carol for 2021! Tell us your favourite carol for your chance to win a Christmas hamper or one of five smart speakers.