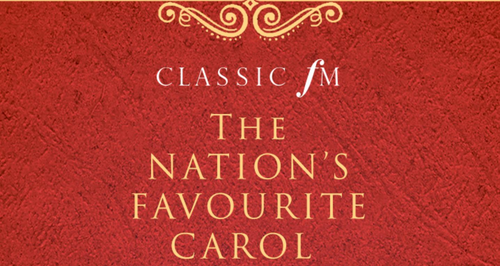 After weeks of voting and thousands of votes, we can reveal the winner of the Nation’s Favourite Carol 2017!

‘O Holy Night’ has topped the annual Classic FM Nation’s Favourite Carol poll, with ‘Silent Night’ beaten into second place for the second time since 2013. Prior to 2013, ‘O Holy Night’ reigned at the top of the charts for 11 years.

In this year’s top 20, the highest climber is Ding Dong! Merrily on High. With lyrics by the English composer George Ratcliffe Woodward, it moves up four places to number twelve. The biggest faller is O Little Town of Bethlehem, dropping three places to number ten.

It is believed that ‘O Holy Night’ was the very first carol to be played on the radio. On Christmas Eve 1906, a Canadian inventor called Reginald Fessenden broadcast the first medium wave radio programme, which included him playing ‘O Holy Night’ on the violin. Composed by Adolphe Adam 170 years ago, the words to the carol come from a French poem called ‘Minuit, chrétiens’ (‘Midnight, Christians’), which focuses on the birth of Christ and the hope of redemption.

The countdown of the top 30 carols will be broadcast in a special Christmas Day programme – The Nation’s Favourite Carol – presented by John Brunning from 1pm on Classic FM.

John Brunning said: “Carols have been part of our Christmas celebrations for hundreds of years and this year’s poll proves they remain as popular as ever. The nation has chosen a wonderful carol as its favourite. Adolphe Adam’s ‘O Holy Night’ has an anthemic quality and majestic melody with lyrics which tell the Christmas message about the promise of redemption. As the first carol ever to be broadcast on the radio, it’s fitting that, once again, it should top our annual chart on Classic FM, the home of Christmas music.”