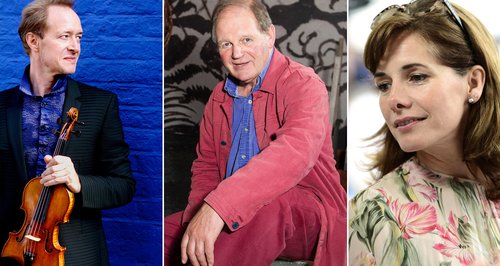 Figures from the world of classical music are among those recognised, alongside former Beatle Ringo Starr and Bee Gee Barry Gibb

Violinist Anthony Marwood has been given an MBE in the 2018 New Year Honours list. He said he was “beyond delighted” at the news: “After months of performing abroad, it was a thrilling surprise to return to the UK and this news.”

Ballet dancer and Strictly Come Dancing judge Darcey Bussell is made a dame, author Michael Morpurgo is made a knight while presenter and author Melvyn Bragg is made a Companion of Honour.

Meanwhile Jonathan Freeman-Attwood, principal of the Royal Academy of Music, is recognised with a CBE and Sarah Alexander, chief executive and artistic director of the National Youth Orchestra of Great Britain – Classic FM's Orchestra of Teenagers – is given an OBE.

Other musical figures to be recognised include David Temple, the director of the Crouch End Festival Chorus, who is made an MBE; jazz singer Cleveland Watkiss, who is given an MBE, and the founder of the London Community Gospel Choir, Bazil Meade, who is also made an MBE.

Among the other prominent names honoured this year are Beatle Ringo Starr, and formed BeeGee, Barry Gibb, who are both knighted.

Author Jilly Cooper receives a CBE, Lady Antonia Fraser is made a Companion of Honour, actor Hugh Laurie is given a CBE and chef Rick Stein is honoured with a CBE.