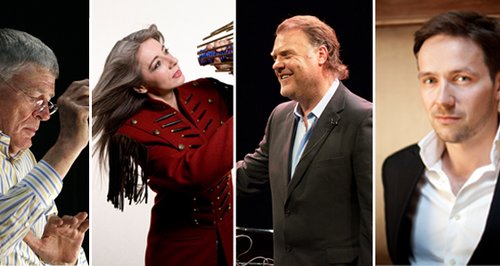 Stars of the classical world are among those recognised in this year’s Honours List, joining sports stars including Mo Farah and Andy Murray, and BFG-actor Mark Rylance

The Welsh bass-baritone Bryn Terfel has been made a knight in the 2017 New Year’s Honours list, alongside actor Mark Rylance and The Kinks frontman Ray Davies.

Speaking to Classic FM, Bryn Terfel said: “A month ago a letter was sent to my agent in Cardiff and I thought it was tickets to the rugby. I was absolutely speechless when I opened it – ashen-white, my heart-rate had tripled, my mouth was completely dry. What an accolade.

“I was given the CBE in 2003, The Queen’s Medal for Music in 2006 and now this is, without doubt, the icing on the cake. You have to step back and think how things have worked out for this farmer’s son from North Wales.”

Stephen Maddock, chief executive of Classic FM’s Orchestra in the Midlands, the City of Birmingham Symphony Orchestra, is made an OBE, while countertenor Iestyn Davies has been recognised with an MBE.

Other figures in the musical world to be recognised include violinist Lennox Mackenzie, former chairman of the London Symphony Orchestra, who is made an OBE, and Professor Jonathan Stephens, former director of Music at the University of Aberdeen, who becomes an MBE.

In other fields, actress Patricia Routledge is made a dame, tennis player Andy Murray and athlete Mo Farah are both knighted, along with Ken Dodd.