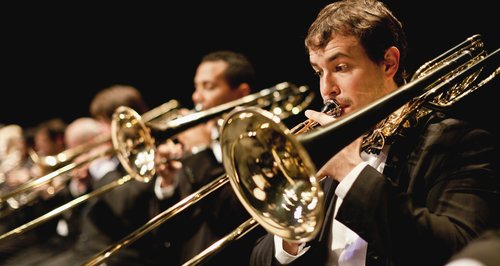 A study has revealed that wearing earplugs is the only effective way orchestral musicians can protect their ears from hearing damage.

The research was led by acoustics expert Remy Wenmaekers from Eindhoven University of Technology, in the Netherlands. He investigated the value of various control measures to reduce the risk of orchestral musicians damaging their hearing.

Using the finale of Mahler’s Symphony No. 1 as an example of loud orchestral playing, Remy studied the effect of sound-reducing measures, including screens, raised platforms for various sections of the orchestra, and the acoustic conditions of the room.

But he found that these measures were mostly ineffective because of the high levels of noise made by the players’ own instruments – and the musicians’ proximity to them.

“There are significant issues with large acoustic screens when used for exposure management in an orchestra, including obstruction of sight lines and the exacerbation of exposure to players ‘upstream’ of the screens,” the report says.

“Investigators identified a possible solution to this issue in a screen being used in front of high level instruments (trumpets) in an orchestra pit. The screens were designed to reduce exposure to those seated in front of the trumpets while having negligible impact on the exposure of the trumpet players themselves.”

Trumpet and flute players were found to be exposed to the highest sound levels, reaching 95 to 100 decibels. According to EU Noise Regulations, employers must provide hearing protection to workers exposed to over 85 decibels.

Cellists and double-bassists, however, produce a relatively soft sound ­– which means their hearing is more likely to be damaged by the instruments around them than their own.

After evaluating surround screens, room acoustic conditions and raised platforms, the researchers found that wearing earplugs and other protection devices were the best way for musicians to protect their hearing.