A new classical 'boy band' has been put together, and people are pretty mad about it 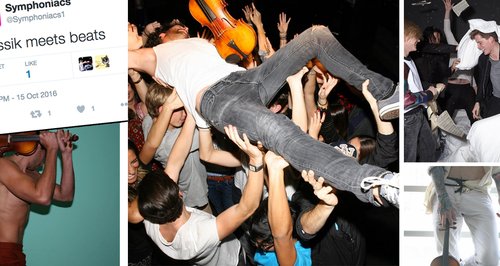 Manufactured classical acts are nothing new, but are Symphoniacs aiming at so many marketing demographics that they forgot the music?

Every now and again, classical record companies or some svengali or other seek to construct an artist for mass consumption, putting classical music (or a version of it) into the mainstream. More often than not, these acts are met with critical derision.

But this time, the members of Symphoniacs (assembled by influential producer Andy Leomar) are advertising their classical pedigree as much as their supposed musical hedonism. Variously they are all international concert soloists and members of top-flight orchestras, trained impeccably and surely would be considered the future of their genre whether they were in Symphoniacs or not.

Surely to purposely recruit musicians of this calibre is a deliberate step to try and sidestep some of the usual ‘but they can barely play their instruments’ criticism usually levelled at so-called ‘crossover’ acts. Throw in a bit of 2Cellos-esque axe work and the video productions of The Piano Guys, and you’ve got an all-bases-covered approach to marketing a new classical act in the 21st century.

Just have a look at the comments here to see exactly what people are making of Symphoniacs. The reactions range from encouragement to disbelief to severe cringing.

Couple of points here. One: how do you conduct a backing track? Two: anyone else feel sorry for the spikeless cellist who has to lug his instrument around the stage?

Also worth checking out is their Instagram feed, which is basically a mix of heavily hashtagged performance shots and close-ups of trainers.

What do you make of this latest attempt at crossover success? Will it work? Is it ‘credible’? Or should the snobs just deal?