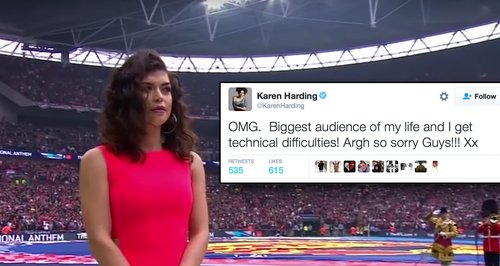 It’s every singer’s worst nightmare: a huge stage, a television audience and a simple song to sing, but it all goes terribly wrong.

When soprano Karen Harding stood on a podium in the middle of Wembley Stadium, the job seemed simple enough: sing the National Anthem, then naff off stage and let the ball-kicking commence.

Twitter went into an inevitable meltdown as onlookers rushed to be the funniest keyboard warrior:

Tinie Tempah performing.
Late kicking-off.
Abide with Me out of tune.
Singer forgets to sing the National Anthem.

"What an honour to sing the national anthem"... Or a few words of it...

Which, when you think about it, is pretty cruel. Watching the video back, it’s pretty clear that Harding is fiddling with her earpiece. With a faulty earpiece in, no foldback monitors to guide her, and about 90,000 people shouting at her, it’s inevitable that she wouldn’t hear the band begin the anthem and subsequently miss her cue.

But, the reasonable among you might ask, what about that not-insignificant sound of that 90k-strong crowd singing the anthem right back at her? Why couldn’t she hear it? Unfortunately, when you’re in the middle of that sound, it’s not so simple. That’s why monitor speakers exist. There’s a good chance that, expecting the sound to come through her earpiece, Harding simply wasn’t tuned in to hear the crowd singing the anthem.

Naturally, the feeling of embarrassment for a singer is huge in a situation like this:

OMG. Biggest audience of my life and I get technical difficulties! Argh so sorry Guys!!! Xx

But Karen, take it from us: this is not your fault. And if anyone says otherwise, well…