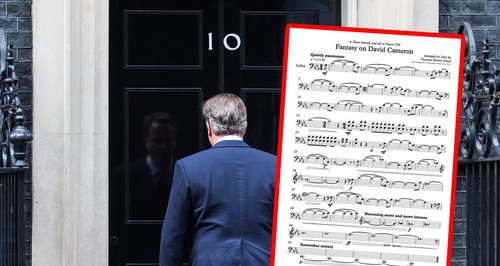 A phrase hummed by the former British PM is transformed in the expert musical hands of composer Thomas Hewitt Jones.

In July 2016, after Brexit and associated political dramas had taken place, David Cameron announced his resignation and stood outside 10 Downing Street for the last time. At the end of his speech, as he turned and walked away, his microphones caught him humming a strange tune to himself.

The music, still unidentified, was enigmatic – at once both quietly cheery, and melancholy. We analysed it for its musical content and the Internet exploded.

Composers and music geeks then responded in their droves, arranging the tune for a nation in need of some entertainment and musical relief.

The motif, which became known as the Cameron Lament, was then transformed with far more polished than we, or David Cameron, could’ve imagined.

Here’s Thomas Hewitt Jones’ ‘Fantasy on David Cameron’ for cello and piano, composed in a fervour at 2AM the following morning:

And then, improvisation genius Gabriela Montero sent us this work of unparalleled cleverness: