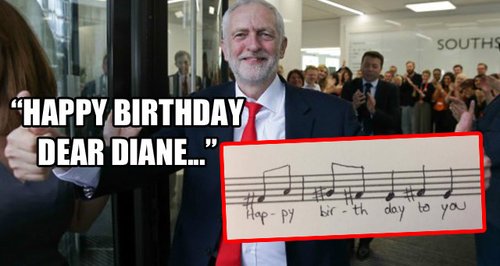 During his speech at a Labour conference in Brighton, Jeremy Corbyn passionately stood up for his fellow Labour Party MP Diane Abbott. But then, everything took a turn for the musically surprising…

The crowd begins the Happy Birthday in an ever crescendo-ing mass murmur. Jeremy, on his podium, doesn’t hear the song come through until the end of the third line.

This brings us to the first interesting change in his rendition: he only starts singing Happy Birthday on the third line, which changes the structure of the song entirely. He then ignores the ‘to you’ part and goes straight for the jugular: the name of his fellow MP.

But that’s not quite as it is in the traditional song. Instead of the usual ascending ‘Happy BIIIRRRTHday’ of the third line, Jeremy starts singing down the octave. The Labour Party leader also adds an interesting emphasis on Diane’s name, stressing the ‘Di’ part in a meaningful manner.

And then, he gets really fancy. Jeremy decides to add a portamento to the final ‘birthday’. Like this:

He then goes down a semitone on the last ‘to you’. Some might say Jeremy is underconfident with his high notes, but we say he just wanted to have a play around with the song.

And why on earth not? It was a heck of an adorable TV moment. We’ll be hearing that Cassetteboy remix any day now…