ANOTHER smashed instrument - this time on an American Airlines flight 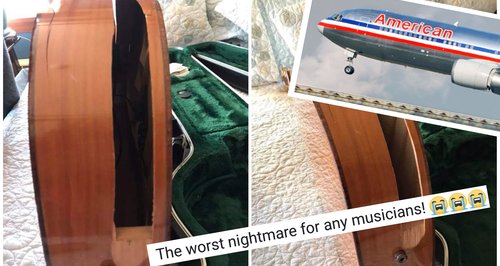 Earlier today George Kahumoku Jr, a four-time Grammy Award-winning Hawaiian slack key guitarist, was traveling on American Airlines from Philadelphia to Minnesota. The body of Kahumoku's instrument was smashed during the flight.

The damage we reported by Gao Hong, a lecturer and ethnomusicologist at Carleton College, Minnesota. Kahumoku had been traveling to the college to present a lecture for students.

Gao Hong moved to the United States from China in the mid-1990s, and claims that on three different occasions, airlines have broken three of her traditional Chinese wind instruments.

Slack Key is a guitar technique originating from Hawaii, where guitar strings are de-tuned and 'slackened' until they form a chord when played together. Kahumoku received the 2007 Grammy Award for Best Hawaiian Music Album for the compilation 'Legends Of Hawaiian Slack Key Guitar — Live From Maui.'