An incident at Dublin airport security left a violist’s precious instrument with a large dent in it.

The owner of a 300-year-old viola has revealed his instrument was damaged during an incident with a security guard at Dublin airport.

Morgan Goff was told his instrument, which is worth £250,000, could not go through the normal scanner because it was too big, and would need to be searched and scanned by hand.

“Firstly, I was told that my viola was too large to fit on the conveyor belt,” said Morgan. “Very strange as I have been putting the viola on these belts for the past 30 years. I was then told to completely empty my case of everything (that is a lot of stuff in my case) and have it checked over by a young security guard.

“I opened my case for him and he went to grab my precious 300-year-old Daniel Parker viola. I stopped him and explained that I would hold it for him as it was extremely old and valuable. I asked him to please be as careful as he could.

“After swabbing my case, he bashed the hard edge of his swab wand into the front of my viola causing an awful crunch and dent in the front. I yelped and asked him what he thought he was doing to which he looked blankly at me and replied, ‘I don’t care’.” 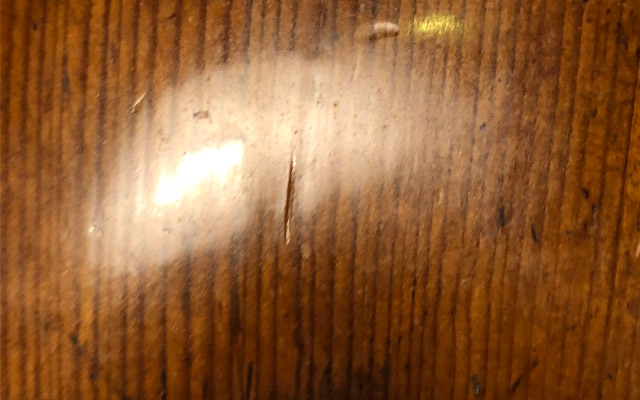 Morgan’s viola after the incident

“I felt as if I was being taught a lesson for not trusting him to hold it. I have been told the damage is repairable and since posting online, I have heard of some truly blood curdling experiences that other musicians have endured. Mine was certainly lesser than a snapped neck!

“Dublin airport told me they would be in touch to discuss and resolve this incident. That was 10 days ago. I have not heard anything yet.”

Dublin airport have since responded to the accusation, saying, “Morgan would have been told by our security screening colleagues, who filled out a damage report form, that he needs to contact our customer service department with all the details of his complaint. He would have been given those details on the day of how he needs to do that.

“Our Customer Service Department have not received a complaint from Morgan yet,” they continued. “A full and thorough investigation of his complaint will be carried out.”

Morgan’s story follows a series of incidents of airlines mistreating instruments, including a 17th-century viola da gamba which was destroyed on an Alitalia flight, and a smashed guitar aboard an American Airlines flight.