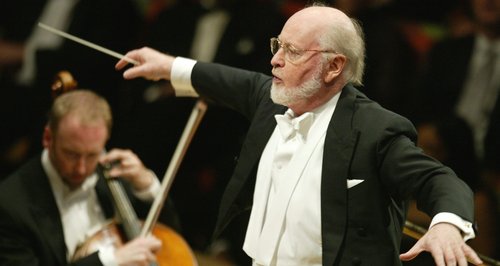 John Williams has written hours and hours of music for the Star Wars movies. But which individual bits are the best? We've decided...

Actor John Boyega, who was plucked from obscurity to star in the new Star Wars trilogy. Here's what we're interested in: how did composer John Williams characterise Boyega as Finn?

“I’m a stormtrooper. Like all of them, I was taken from a family I'll never know and was raised to do one thing.” With those words, John Boyega's Finn sets out his emotional stall in The Force Awakens – it's a key moment, scored beautifully by John Williams.

You’ll hear this one in every Star Wars film. Aside from the main theme itself, it might be the most pervasive and well-known theme in the whole saga. It crops up in trailers in weird plinky-plonky guises, it conveys the majesty of a binary sunset and, like the mystical energy it embodies, it binds the saga together.

The Battle of Hoth

So once you’re past the pre-amble, this is a hugely important and impressive epic in the Star Wars soundtrack canon. It incorporates the Imperial March in several guises, the Rebel fanfare (it’s a fight, remember?), creaky pianos, wiry strings and, of course, some truly huge battle crashes. A masterclass in film scoring.

Literally what the cor anglais was made for. Discard all other cor anglais material immediately. It was made specifically to soundtrack the gambolling of these hooded little scavenger goblins or whatever they are.

Duel of the Fates

If you are one of the few people labouring under the impression that the Star Wars prequels are anything other than vain, unstable toy adverts, then the music of John Williams should be your go-to argument. This cut from the prequel trilogy is about as powerful and iconic as anything Williams has written before or since, and it really did deserve a better film.

It was perhaps surprising to hear a theme at the end of The Force Awakens that rams together a beautifully delicate flute melody and some properly squelchy chords, chords that not only hint at dark things to come, but link directly to the Imperial March.

That clanking percussion is a huge nod to Williams’ Slave Theme for Indiana Jones & The Temple of Doom, a slightly incongruous but still welcome little insider joke - but once that’s out of the way, this is easily one of the best themes of the prequel trilogy.

You can feel those fingers sliding way up the strings, and when the choir comes in… ugh *expires*

Blink and you’ll miss it, but this spooky and atonal theme for one of the best-loved Star Wars characters gradually evolves into a restless little march, before returning to its original chords.

Call us controversial, but the most feels-inducing moment soundtracked by this particular leitmotif comes in the trailer for The Force Awakens. It does sound magnificent at the end of The Empire Strikes Back, with all its uncertainty and wistfulness, but in the trailer it becomes the moment that Star Wars fans knew everything was going to be OK.

March of the Resistance

The Force Awakens soundtrack has proven a tougher nut to crack than most of Williams’ efforts, but with repeated listening certain themes have jostled their way to the front - especially this daring little march, equal parts hardened militarism and typical Williams-esque angularity.