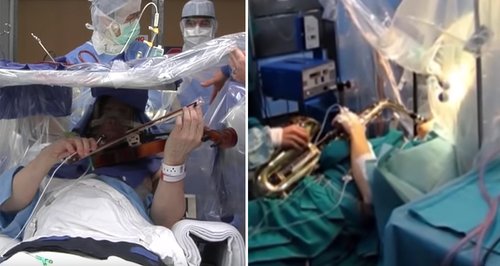 The brain of a musician is an incredible thing, as these videos prove.

Advances in brain-mapping technology and finely tuned anaesthetics have led to a spooky phenomenon in modern medicine: conscious brain surgery.

It’s actually not that unusual. Doctors prefer to keep you awake so that they can check they’re not disrupting various brain functions whilst they’re rummaging around inside your skull. I mean, that’s probably for the best, right?

When it comes to treating musicians, surgeons often ask them to perform their instrument to keep an eye on these advanced cognitive functions, and being performers they’re often happy for these surgical concerts to be filmed and put up on the Internet. Here are a few of the craziest and most fascinating videos of musicians undergoing brain surgery.

Elishuv was a renowned player in the Lithuanian National Symphony Orchestra when little by little her bowing arm began to shake. Her brain had developed what’s called an ‘essential tremor’ – a misfiring of electrical signals which cause involuntary movements. Such a shake would be an inconvenience for most people, but it’s a career ending disaster for a string player. Elishuv was treated using a technique called DBS (deep brain stimulation), which involves the implantation of an electrode into the brain to counteract the misfiring signals.

She played Mozart throughout her surgery, and in this video you can hear the tremor improve as the surgeons position the electrode in the optimal place. At 00:40 they ask her how she feels and she replies, “I am in control”:

Slovenian tenor Ambrož Bajec-Lapajne was diagnosed with a brain tumour in 2014 and underwent a craniotomy to have it removed. Doctors asked him to sing during the operation to keep an eye on his motor functions and his ability to recognise key changes. Here he sings two couplets (the first and last) from Schubert’s lied ‘Gute Nacht’. The scary moment comes at 02:40, when the doctors probe an area which shouldn’t be disturbed...

Carlos Aguilera also had surgery to remove a brain tumour, and his key concern was retaining his ability to improvise on his saxophone. Watch him calmly play jazz whilst surgeons work on his exposed brain. What a brave guy.

Roger Frisch was a violinist in the Minnesota Orchestra when his essential tremor stopped him playing. He made the news by returning to the concert platform within three weeks of his DBS treatment. Talented surgeons at the Mayo Clinic designed a special bow with a three-axis accelerometer so that they could track the tremor on a computer screen as they worked to eliminate it.

Now back to performing with the Minnesota Orchestra, Roger can turn his career-saving electrodes on and off at the touch of a button. Skip to 03:26 to see the difference:

All these musicians show tremendous bravery and strength of character by making music in the most unnatural circumstances, but the real creative talent here is that of the medical professionals who devise ingenious ways to cure their patients’ symptoms and save their careers.