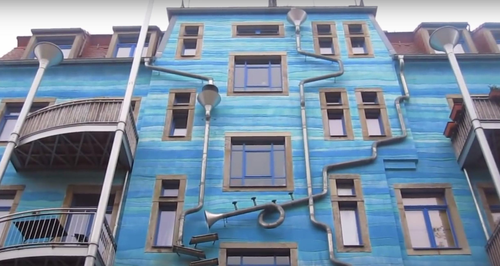 Nestled away in the student district of Dresden is a house which literally sings in the rain.

The singing house is the work of sculptor Annette Paul and designers Christoph Roßner and André Tempel, who all live in the building itself. Annette says she was inspired by living in St. Petersburg, Russia, where bad weather would create a ‘rain theatre’ on the windows of her house.

With this in mind, she and her fellow tenants designed the intricate network of pipes, funnels and spouts with optimal acoustics to amplify the rain.

The facade of the house was also inspired by the idea of a Rube Goldberg Machine, and you can see echoes of these strange contraptions in the web of pipes and funnels which catch the rain as it falls.

Since its installation in 1999, this quirky soundscape in East Germany has attracted a huge tourist following. After all, it’s the perfect sight-seeing option for a rainy day!