Why do musicians always use vibrato? 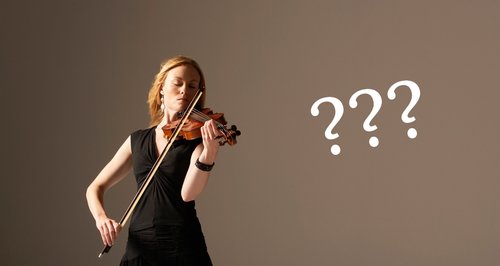 Vibrato can add depth and beauty to a piece of music – and it’s pretty much an irreplaceable tool when it comes to expression. But has this always been the case?

Listen to Nicola Benedetti play the second movement of Tchaikovsky’s violin concerto, with some absolutely heart-melting vibrato (skip to 01:14 for the good stuff):

Now listen to Roger Norrington’s controversial recording of Mahler’s Symphony No. 9, without vibrato:

Setting all personal preferences aside, once we are used to hearing orchestral instruments play with vibrato, it is hard not to be a little perturbed by Norrington’s recording.

Firstly, what exactly is vibrato?

Vibrato is basically a vibrating or pulsating of the sound, which is used to add expression to the music. Generally speaking, it's regular in both pitch and oscillation.

Instrumentalists learn how to use their fingers, lips or diaphragm to create vibrato – yet for singers, it’s more of a natural revelation than a practised technique. Singing teacher Jean-Ronald Lafond says: “Vibrato is not learned. It manifests when the voice is functioning in a consistent manner relative to breath pressure/flow. Thus, when a singer achieves good vocal habits, the vibrato is simply revealed.”

Stepping back from the 21st and 20th centuries, vibrato hasn’t always been seen as a natural, healthy technique in musical performance.

In the Baroque period, it was thought that if vibrato was used too widely, slowly or simply too often in one section of the orchestra, it could obscure an important harmony in another section. Therefore, in recordings from musicians who specialise in early music, vibrato is generally used sparingly – like in this lovely recording from The King’s Singers:

A study in the Journals at Claremont quotes Greta Moens-Haenen’s work on music in the Baroque period, Das Vibrato in der Musik des Barock. The work explains that, firstly, intentional vibrato was a type of ornament, narrower than a half step in width, and used for expression; secondly, various types of ornamental vibrato existed, with many ways of producing it; thirdly, a continuous instrumental vibrato was not deemed acceptable; and fourthly, a ‘natural’ vocal vibrato possibly existed, but was very narrow and unobtrusive.

If vibrato wasn’t used in the Baroque period, we might assume that because of its expressive nature, it should be associated with 19th-century and Romantic music. But period oboist Bruce Haynes notes that continuous vibrato is a specifically 20th-century phenomenon (Early Music America).

Most of us wouldn’t even feel the need to debate the sound of vibrato and ‘straight tone’ anymore, because it’s assumed that vibrato will be incorporated into any orchestral performance.

But clearly, the v-word once had the power to end friendships and divide music lovers. Even now, there is a Facebook group called ‘Vibrato is a bizarre and unnecessary affectation’ with a loyal following of 167 users. Yep, really:

Many believe it to be unnecessary – a flowery addition that covers up the real beauty of the music. Even Mozart said that string players used vibrato too often, and that they should be used only on sustained notes and at the ends of phrases when used as an ornament. (Quora).

So perhaps, like dungarees and legwarmers, vibrato will go back out of fashion in a century or so’s time. And who knows, we might end up with a brand new technique…

Any ideas what it could be?