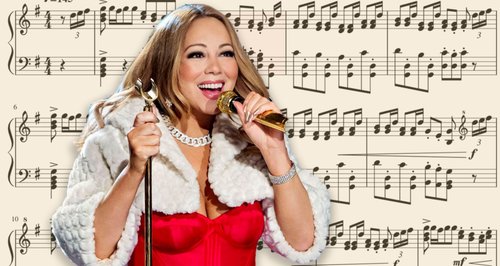 From Tchaikovsky’s The Nutcracker to Mariah Carey’s All I Want for Christmas, these are all the elements that have to be in a Christmas classic.

A touch of bitters –  some minor chords

But it’s Christmas, the season of joy, we hear you cry. And caramel tastes even better with a sprinkling of salt.

The point is, sprinkling minor and diminished chords through a song or piece that’s otherwise in a major key – or even changing key to a minor key for a section – only enhances that warm Christmas fuzzy feeling (to be technical about it).

Take a listen Mariah Carey’s ‘All I Want for Christmas is You’. That chord under ‘presents’ in the opening line is a scrunchy half diminished chord. It’s D minor 7 flat 5 to be exact. That chord on its own does not a Christmas song make.

BUT what that chord does do is bring in that delicious sprinkle of salt that makes your sweet caramel all the sweeter.

Read more: McDonald’s tweeted ‘All I Want for Christmas’ as music notes and got trolled by Mariah Carey

Let’s go all the way back to Tchaikovsky for this. Because he is the original and best master of Christmas music.

Let’s take his Nutcracker ballet – a work that’s set at Christmas and is performed every winter around the world.

We’ll take the ‘Waltz of the Flowers’ as our example. (But really you could stick a pin in any part of The Nutcracker and find an absolutely storming tune).

The waltz opens with a simple but catchy tune before the harp comes in with a shimmering interlude. And then it’s over to the brass and winds who pave the way for the centrepiece of the melody, a soaring, whirling waltz tune from the violins that demands to be hummed along to.

A story from the past

Christmas is 90 per cent nostalgia, so if your Christmas tune can hint at past times, broken hearts (oh hi there Wham!) but a determined optimism for the times ahead – all the better.

Irving Berlin’s ‘White Christmas’ ticks this box and then some.

Those lyrics are doused in more nostalgia than your nan puts sherry on her Christmas pudding:

I’m dreaming of a white Christmas,
Just like the ones I used to know
Where the treetops glisten and children listen
To hear sleigh bells in the snow.

In Crosby’s recording the second half of the song is performed by a choir – they sound more distant and fainter than Crosby’s voice. They could almost be ghostly voices from those past Christmases…

And the fact that the recording has that evocative warm crackle of vinyl only feeds that feeling that Christmas really was better in the 1940s.

This is crucial. In fact, if you don’t include sleigh bells you’ve failed to write a Christmas hit.

And for our example we’re returning to Russia. It’s Prokofiev’s Troika. The piece was originally written as music for a film called Lieutenant Kijé. But the key thing here is that this is essentially a concerto for sleigh bells.

Listen to this and we defy you not to come over all Christmassy. Right, we’re off to eat a mince pie.

And if you want back-to-back Christmas music, why not listen to Classic FM Christmas, a special stream playing nothing but the greatest festive music.