9 classical pieces that no child should ever be exposed to 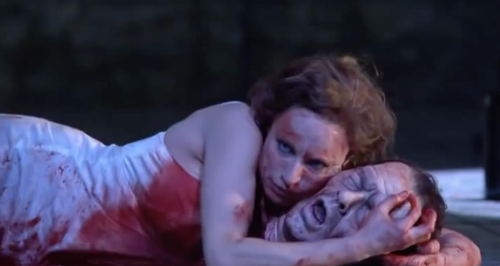 Strauss's Biblical tale of murder and debauchery has been traumatising audiences for more than a century. The finale, in which Salome tells the severed head of John the Baptist of her passion for him and kisses it (before being killed herself) is strictly only for strong stomachs. Strauss created a chord (see video at 4:52) known as "the most sickening in all opera". One for after the watershed.

The King of Thrace rapes his sister-in-law Philomel and cuts her tongue out to silence her. She manages to communicate what has happened to her sister, the King’s wife, who kills their young son, cooks him, and serves him to the King. Babbitt's 1964 score is a heady fusion of The Clangers and the amplified digestive system of the Queen of the Night. The story and music would keep anyone up at night.

Set in 1794, Poulenc's opera tells the story of Carmelite nuns who, during the final days of the French Revolution's Reign of Terror, were excecuted for refusing to renounce their vocation. The work's climax in which the nuns are led one by one to the guillotine, is extraordinarily powerful and, well, quite upsetting really.

Set in scary Scotland, this Romantic-era opera relates the saga of Lord Ruthven the vampire. He must sacrifice three virgin brides within 24 hours, or die. According to the synopsis, in Act II, Ruthven appears and impresses the villagers with his largesse. That’s enough to scare anyone. The music compensates for the shocking story.

This sounds like Telemann meets Tetris in a hornets' nest. For five hours, Cage mixed seven solo pieces for harpsichord – created from randomly processed pieces by the likes of Mozart, Beethoven and Chopin – with 52 computer-generated tapes. Cage initially turned down the commission, stating that he hated harpsichords because they reminded him of sewing machines. If you want your kids to like harpsichords – or any instrument for that matter – when they're older, never let them hear this.

The voice of Florence Foster Jenkins

The Queen of the Fright herself is enjoying something of a revival these days thanks to her on-screen portrayal by Meryl Streep. If you know little about opera, let us assure you: this is not what it should sound like. This is dreadful. Your children must be protected.

Hiding behind the sofa when the deeply unsettling Psycho is on the telly won’t make any difference; Hitchcock himself said that “33% of the effect of Psycho was due to the music.” The director originally didn’t want any score for the gruesome shower scene but Bernard Herrmann’s stabbing violins make the terror complete.

Believe it or not, Exotica was a commission for the Munich Olympics. Mind you, any athlete hearing this would be motivated to run very fast indeed, as far away from the players as possible. The six performers were asked to ‘manhandle’ some 200 wind, string and percussion instruments wholly unknown in Europe. There's only one word for this: horrible. Truly the stuff of nightmares.

Krzysztof Penderecki: Threnody to the Victims of Hiroshima (1960)

It was only when Penderecki first heard his piece for 52 strings performed that he decided to dedicate it to the victims of Hiroshima. Every bit as spine-chilling and horrifying as the event that it now evokes, the music was used in Stanley Kubrick's 1980 horror film, The Shining and you can hear why.