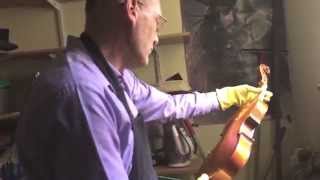 How to make a Viola Tennis Racket

Viola tennis anyone? A new video has emerged offering a different way to conceive the string instrument during the summer months

A recently uploaded video on YouTube offering a new way to approach the orchestral staple is already being shared widely on social media channels. The video features one of the country's finest violists Graham Oppenheimer, who begins with tuning his instrument, only to strip away the strings and begin the Wimbledon-inspired transition.

After the viola is gutted, it is filled with expanding builders' foam and a make-shift handle added, before the instrument is taken to the tennis courts to show off its new function.

The 10 worst things about playing the viola

The video was set to Bach's Prelude No. 1 played on the viola, presumably by Oppenheimer and directed by Tallulah de Castro-Gray, who describes the process as the ultimate viola joke.