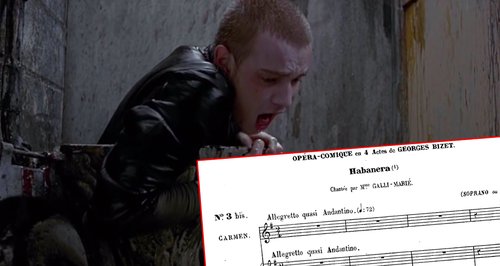 Bizet’s Carmen co-existed beautifully with New Order and Iggy Pop and introduced a generation to opera.

Trainspotting is the quintessential 90s movie, a caustic tale of drug addiction, manhood, bitter regrets and testing friendships. The perfect place for a spot of opera, right?

Director Danny Boyle’s films are known for their impeccably curated soundtracks, and Trainspotting happens to boast perhaps his finest musical moment. A key scene in which Mark Renton (Ewan McGregor) manages to procure, lose and then miraculously recover some suppositories has gone down as one of grimmest in recent movie history, but just think about how the soundtrack affects it.

Observe and listen to the Habanera from Bizet’s opera, Carmen, in the worst toilet in Scotland:

This is much more than the deeply ironic ‘isn’t classical music stuffy’ use of classical music that you often find in the movies. You know, the refined and stiff older gentleman who has his feathers ruffled because of some loud rock music interrupting his Haydn string quartets.

The counterpoint between the music and visuals is obvious (‘man does disgusting things while dainty music plays’), but its function is far cleverer. In Bizet’s opera, this aria introduces the title character, a fiery, intoxicating temptress to whom the male characters become addicted. Coincidence?

For this particular excerpt to appear on one of the biggest-selling movie soundtracks of recent times is quite a coup as well. Bizet nestles rather snugly next to the likes of New Order, Pulp, Iggy Pop, Blur, Underworld and a host of ‘90s legends. The soundtrack, and that of the recent sequel, is undoubtedly the place where many thrill-seekers heard their first opera. Maybe even their first bit of classical music.

And thanks to Danny Boyle’s striking visuals, it’s an experience they’ll remember.