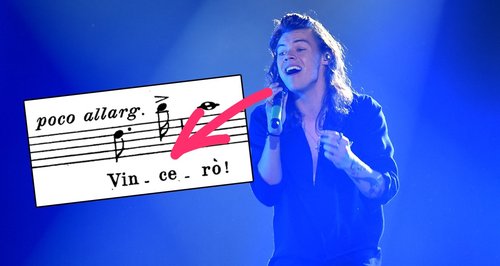 With all the anticipation and general hoo-ha about Harry Styles’ forthcoming solo material, we thought we’d apply a critical eye to his debut single, ‘Sign of the Times’ - and the signs are good.

What’s most impressive about ‘Sign of the Times’ is the amount of musical restraint it shows. The entire song is based around three simple chords (which, for a song that nearly touches six minutes, is admirably dicey), meaning the drama and direction has to come from the voice, and the instrumental embellishments.

And the voice itself, Styles’ surprisingly full tenor, is happy to climb into falsetto when required. But underneath that, those same three chords just keep rolling: F major, D minor, C major. It’s a pleasing circle, providing a solid base for various swirling strings and choral arrangements to flex beneath Styles’ voice. In terms of idiomatic pop writing, there’s an awful lot to be said for keeping it simple and understandable - and you’ll find that many of the most popular opera arias from history have clung to this principle as well.

Think of Nessun Dorma - there's almost nothing to the accompaniment, it's mostly chordal and allows the soloist to milk those high notes like a Swedish goat herder. The same principle applies here - Styles is left to his own devices to provide character and drama with his voice alone.

If we were going to poke holes in Styles’ vocal (and yes, we know it’s not really about that…) then we’d say he relies a little too much on those ‘blue’ notes, the ones that so desperately want to hit the major third but he can’t resist flattening. But it’s a minor quibble.

Also, one final thing - was it just us, or was that a deliberate nod to Prince at the song’s very end? It’s brave to call your debut single ‘Sign Of The Times’, but perhaps you then balance it out by referencing the famous ‘Purple Rain’ descending motif. This one:

Nods to legends aside, this is pretty bold stuff. Long, luxurious and vocally confident (if unsophisticated), ‘Sign Of The Times’ shows just how much you can do with three chords and a big budget for extraneous instrumentation.