A heartfelt tribute to the 2/4 bar in OutKast’s ‘Hey Ya!’ 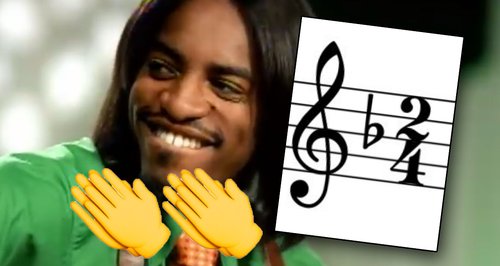 When you’re writing a pop song for the mass market, one of the main priorities is, generally speaking, simplicity: hooks you can sing along with, easy melodies and rhythms that any can pick up and repeat.

Atlanta hip-hop innovators OutKast put out their monster-selling single ‘Hey Ya!’ in 2003, at the height of their commercial power - but they smuggled in a cheeky compositional quirk that goes almost unnoticed unless you stop to think about it.

Each iteration of the song’s chord main progression (G major, C major, D major, E major) features a decidedly wonky 2/4 bar but, thanks to the effortless performance it’s barely detectable. If you want to spot it in the chorus, it’s basically when André 3000 sings ‘Hey’ for the second time:

You’re thinking ‘big deal’, right? Plenty of writers put clever tweaks in their pop songs. But what’s so gleeful about this example is that it wears its cleverness lightly. It’s not like Pink Floyd writing ‘Money’ in 5/4 just so they looked like brainiacs - this is deliberately putting something complex into a song and somehow still making it perfectly accessible.

The legacy is far-reaching, too - listen to any highly-produced R&B album from the last 15 years, a Beyoncé or a Frank Ocean, for example, and you’ll hear unbelievably complex rhythmic patterns being smuggled in. But unlike ‘Hey Ya!, these are very detectable. ‘Hey Ya!’ is smart: you can still dance to it without going off the beat, you can still sing along without getting confused and it’s still a perfect pop song.

What makes the Star Wars soundtrack so good? An analysis of John Williams’ music.