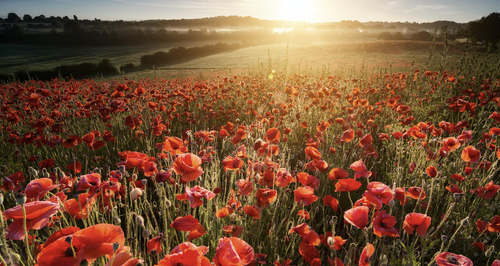 A selection of uplifting and reflective classical music, from hymns to reflective orchestral and choral works, to mark Remembrance Day.

Remembrance Day, held around the country on 11 November, marks the date the First World War ended in 1918. Here are some beautiful, reflective pieces for remembrance, as we remember those who have lost their lives in world wars and other military conflicts.

Quintessentially British, 'Nimrod' from Elgar's Enigma Variations is imbued with a sublime pathos. The profound beauty and reflective nature of the music make it a favourite among those seeking a moment of calm.

The mournful solo bugle with its sparse melodic military call is played at services throughout the country on Remembrance Sunday. Respectful and regal, the march-like rhythms gradually die away until the music comes to rest on a long held note.

Read more: Lest we forget – the best music for Remembrance Day

3. Butterworth - The Banks of Green Willow

A beautiful piece of pastoral music, conjuring idyllic scenes of rolling countryside. Butterworth composed the piece in 1913, and it was first performed in the following year. He was killed at the age of 31 during the Battle of the Somme in 1916.

Britten's stunning War Requiem sets poetry by war poet Wilfred Owen alongside traditional Latin Requiem mass texts. It was commissioned to be performed in Coventry Cathedral, marking its consecration after the original building was destroyed in 1940.

One of the most mournful cello melodies in all of the classical canon, Fauré's Elegy captures an impressive range of emotions. From gut-wrenching anger to heartfelt sorrow, fleeting memories of happiness and mournful cries, the beautiful music communicates directly from the soul.

6. Walton - Pieces from A Wartime Sketchbook

A stately selection of music from the wartime composer, who was exempt from British military service during the Second World War so he could write the music for propaganda films.

This pacifist masterpiece, Farewell to Arms, was composed in 1944 as Finzi dealt with the realities of the First World War. The beautiful music is scored for tenor and small orchestra.

Many composers set the text to a Requiem mass, but far fewer chose to set the final text of the 'In Paradisum'. The text tells of the soul finally coming to rest in Heaven with God, and Duruflé's setting brings the words to life in an angelic outpouring of praise.

This cantata, written in 1936, is a plea for peace in the face of the threat of impending war. It takes its text from the Mass, poems by Walt Whitman, a political speech, and sections of the Bible. The words 'Dona nobis pacem' (grant us peace) punctuate the piece.

Originally intended as a light-hearted counterpart to Salut d'Amour, Elgar realised his poignant music, written shortly before the start of the First World War and first performed in August 1914, was worthy of a more intense title. The word he chose, Sospiri ('Sighs'), is wonderfully descriptive of the expansive violin music, accompanied by flowing harp.

The Australian and British composer Frederick Septimus Kelly wrote his Elegy for Strings at base camp at Gallipoli in 1915 in memory of his friend, poet Rupert Brooke. Kelly was killed in action during the First World War in November 1916.

Howells did not serve in the First World War after he was diagnosed with Graves' disease in 1915. He was given three months to live, but survived until 1983. His transcendental Requiem was published in 1980, almost 50 years after it was first composed.

Gurney enlisted as a soldier in the Gloucestershire Regiment in 1915, but suffered a breakdown in March 1918, apparently as a result of shell shock. He wrote this song before he was declared insane in 1922, and spent the last 15 years of his life in mental hospitals.

Completed in 1915, Edward Elgar was inspired to write this piece by his friend Sir Sidney Colvin, setting the famous text by Laurence Binyon. "My portion of this work I dedicate to the memory of our glorious men, with a special thought for the Worcesters," said Elgar.