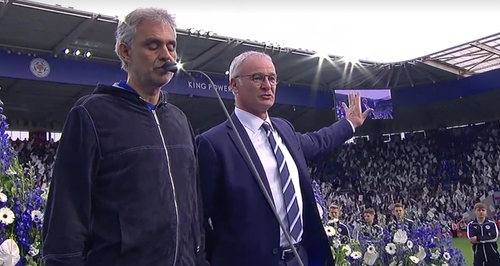 Football chants were swapped for operatic arias in Leicester on Saturday. Leicester City were celebrating their unlikely taking of the Premiere League title, and the club's manager Claudio Ranieri roped in his friend and fellow countryman Andrea Bocelli to lead the celebrations.

Tenor Bocelli, sporting a Leicester City shirt, took to the pitch to serenade the stadium with Puccini’s famous Nessun Dorma from the opera Turandot.

A visibly emotional Ranieri held up his hand to silence his teams chanting supporters at the beginning of the aria.

Bocelli was also given a tour behind the scenes at the stadium.

Wonderful hospitality was so fantastic to meet everyone #Leicester #LeiEve @LCFC pic.twitter.com/YUFR8Ay0XR