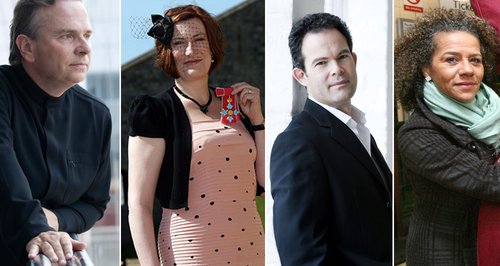 Stars of the classical music world have been recognised in the annual Queen’s Birthday Honours list, alongside J.K Rowling, Billy Connolly and Ed Sheeran.

Conductor Sir Mark Elder has been made a Companion of Honour while the mezzo-soprano Sarah Connolly is made a Dame.

The composer George Benjamin, whose opera Written on Skin was staged at the Royal Opera House in 2013, receives a knighthood while opera singer Gerald Finley is given an CBE.

“It was a great surprise, it’s a great thrill and if it has something to do with my wonderful orchestra in Manchester then I’m very happy.

It’s so important that the creative life of a country is celebrated at all levels and by everybody, that everybody believes the creative work of a country helps to define what that country is. And the very broad spectrum should be a big part of that. Music says something to people in their lives, whichever sort of music that is, that can’t be replaced by anything else.”

Sarah Connolly, who was made a CBE in 2010, told Classic FM:

“I felt deeply honoured and amazed that anyone would write in on my behalf and nominate me. At first I thought I’d got into trouble, because I’m quite politically active and I thought ‘I’ve overstepped the mark, the Cabinet Office are cross with me.’

“I would like to use my damehood to highlight things like the lack of artistic education in secondary schools. If I can get people to listen to me, and politicians who are afraid of approaching arts subjects to work with me, that would be great. I would love to see more politicians at the opera houses and concert halls.”

Gerald Finley said his CBE was “a huge honour,” adding: “My hope is that the true art of singing, with beauty of voice and artful accomplishment, will continue to impact live audiences and will encourage audiences to share in the direct live encounter, to help soothe, uplift and guide us through unpredictable and difficult times in our personal and social environments.”

Other musical figures to be recognised include double bass player Chi-chi Nwanoku and baritone Roderick Williams, who are both made OBEs. The co-founder and president of the European Union Youth Orchestra, Justine Bryer, is awarded an OBE.

Outside the classical music world, Harry Potter-author J.K. Rowling is made a Companion of Honour, along with Sir Paul McCartney and Delia Smith, while actor Billy Connolly is given a knighthood. Actresses Julie Walters and June Whitfield are both made Dames and Patricia Hodge is recognised with an OBE.

Meanwhile singers Ed Sheeran and Emile Sandé are both awarded MBEs and The Snowman-creator Raymond Briggs is honoured with a CBE.

Ashley Tabor, the founder and executive president of Global, Classic FM’s parent company, was awarded an OBE for services to the media industry.