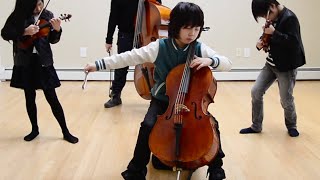 According to their YouTube channel, the quartet have been playing together since they were all just four years old.

Jackson's iconic song has been tackled by other classical superstars in the past, including violinist David Garrett in 2008, and the viral video superstars 2Cellos.

Speaking of 2Cellos, anyone else see a resemblance?

Guys, it might be time to think about becoming 3Cellos.

Cellist for the Joyous String Quartet Justin Yu has previously appeared on The Ellen Degeneres Show in the US, while the quartet has now made several appearances on Korean and Chinese TV.

It's not the only pop cover they've attempted, either. Here's their version of Katy Perry's 'Firework':