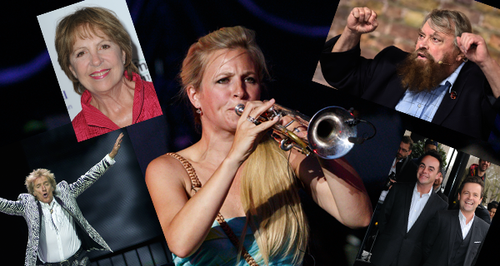 Trumpeter honoured for services to music, alongside pianist Paul Lewis and other celebrities.

Balsom, 37, has been a major force in the classical music scene since first emerging some 15 years ago.

In addition to her concerts and recordings, she has been a passionate spokesperson for music education, and has won numerous awards, including three Classic BRIT Awards and two Honorary Doctorates.

The trumpeter told Classic FM's Eleanor Noakes that the OBE was a "wonderful surprise".

"Especially being the year of The Queen’s 90th birthday, it seems even more special in some ways for me," Balsom said. "I'm just delighted."

Listen to Alison Balsom talking about her OBE, here:

The pianist Paul Lewis is named a Commander of the British Empire (CBE). Lewis is known for his close affiliation with London’s Wigmore Hall and his epic performances and recordings of all 32 of the Beethoven piano sonatas. Edinburgh-based composer John McLeod also receives the CBE.

Investment banker Simon Robey, who is the Chair of both the Royal Opera House and Aldeburgh Music, has received a knighthood. Professor Colin Lawson, Director of the Royal College of Music, receives a CBE for services to music and music education. Dr Brian Lang, who chairs the Royal Scottish National Orchestra, Classic FM's Orchestra in Scotland, also receives a CBE for services to the arts, heritage and education.

Other figures from the world of arts and entertainment, honoured by HM The Queen on the occasion of her 90th birthday, include singer Rod Stewart who receives a knighthood for his services to music and charity.

Downton Abbey star Penelope Wilton is made a Dame for her services to drama, while Second World War's 'Forces Sweetheart', Dame Vera Lynn, 99, becomes a Companion of Honour.

TV presenters Ant and Dec receive OBEs, as does the veteran actor Brian Blessed for services to the arts and charity.