These music students had the PERFECT response for anti-gay protesters 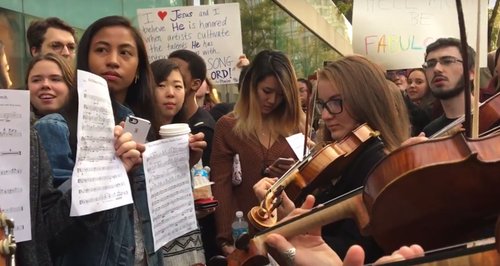 When protesters from the Westboro Baptist Church showed up at the Juilliard school of music in New York, they had the most righteous response.

Members of the extreme church often cause public outrage with their inflammatory anti-gay placards and slogans, but students from Juilliard and from nearby La Guardian High School had a response planned:

Despite advice from the school itself, these students decided to voice their opposition to the Westboro Baptist Church by rick-rolling them, i.e. performing a rendition of Rick Astley’s ‘80s hit ‘Never Gonna Give You Up’.

If we could give ONE sermon to the @JuilliardSchool students we talked to this morning >> https://t.co/zoFttuOq6D | pic.twitter.com/mYNBo241Gz