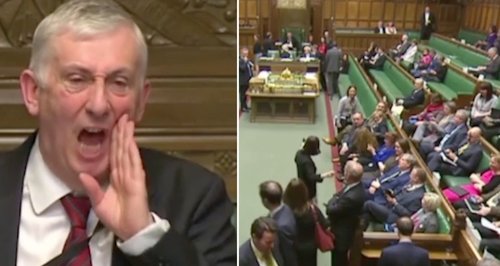 A group of Scottish National Party MPs whistled and hummed Beethoven’s tune – which was adopted as the anthem of the EU – as MPs voted on the Bill to trigger Britain’s exit from the EU.

All 54 members of the SNP voted against the Bill but the Bill was passed with a majority of 372.

Deputy Speaker Lindsay Hoyle brought the performance to an end, however, saying “Order! It’s very good to hold a choir but what I would say is I don’t mind singing but I certainly can’t allow it in the chamber.

“Because before we know it we could hear other tunes and I don’t want to get into that. Some of them haven’t quite got the voice on this side of the chamber – I don’t want a sing off.”

The Ode of Joy from the final movement of Beethoven’s Ninth Symphony was adopted as an anthem by the Council of Europe and the European Union. It’s played on official occasions by the EU.

Since Britain voted to leave the EU, the piece has been used as a protest – most notably by a group of musicians who came together to perform the piece in London immediately after the result of the referendum was announced.