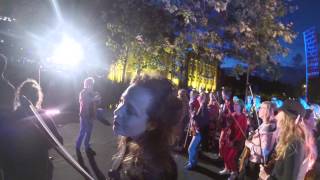 A GoPro camera mounted on top of a cello has captured the moment an orchestra stormed an outdoor music festival.

Think orchestral music is all white ties, curtain calls, ageing audiences and polite ovations? Here's something to change your mind.

The Ricciotti Ensemble has just posted some up-close footage of its performance at the Amsterdam Canal Festival – and it's so good, we had to share it.

The Amsterdam Canal Festival seeks to bring classical music to a younger audience, presenting its concerts in a style closer to outdoor rock and pop festivals. In this video the orchestral musicians run on to the stage to play an arrangement of 'Our Day Will Come' by Willem Breuker. A GoPro camera attached to one of the instruments is recording it all too.

What's captured is a full orchestra dancing, singing, whooping and making thrilling music. The crowd goes crazy, and at the end there are bows as well as instruments thrust into the air.

The Ricciotti Ensemble is a Dutch orchestra that indulges in the spontaneous. They often give free concerts in places where audiences don't encounter an entire symphonic orchestra – like hospitals, schools and town squares.