Competition violinist: ‘musicians should be competitive with themselves, not with other people’ 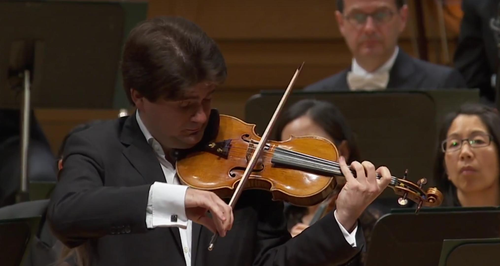 Violinist Fedor Rudin told Classic FM how he feels about the nature of competition when it comes to the arts.

We caught the young French-Russian virtuoso Rudin backstage at the Montreal International Music Competition, where he told us his views on the international competition circuit, and why he doesn’t actually practice that much.

Is a competition like this tiring? Are you constantly exhausted?
Actually, no. There is a lot of time to relax in between the rounds. If you go to an international competition you don’t go there to prepare, basically you’ve already practised. Personally, during these two weeks, I never practised more than three hours a day. Yesterday was an hour and a half, the day before was one hour, and today I don’t plan to practise at all. Otherwise I don’t get energy for performance. There is the physical energy and also there is the mental inspiration. If I play it 15 times in a day then I can’t play it nicely in the evening.

Do you know a lot of musicians that do the opposite, i.e. practise all the time?
Yes. But for me, it doesn’t work. I’m not saying one is the good system and one is the bad system, but for me it’s just impossible. Especially now - a few months ago I broke my arm and I have to be careful with practising. And I’m playing a concerto which is quite technically demanding, so I’d rather be careful.

Should musicians be competitive?
I think musicians should be competitive with themselves, not with other people. The principle of doing an international competition in the arts is, in my opinion, not logical. Maybe there are some people who come here and they’re competitive, or they’re trying to be better than someone. If I manage to be better than myself then I’m happy. Any of the 23 competitors in this competition could’ve been in the finals, it’s just a matter of points and opinion of the jury, and luck. I don’t believe that if you win first prize you are the best.

Later on, Rudin performed the Wieniawski Violin Concerto No. 1 in the first leg of finals for this year’s Montreal competition. But we managed to convince him to give us a sneak preview of the cadenza, backstage:

And here he is doing the whole thing, live on TV, that very same night: