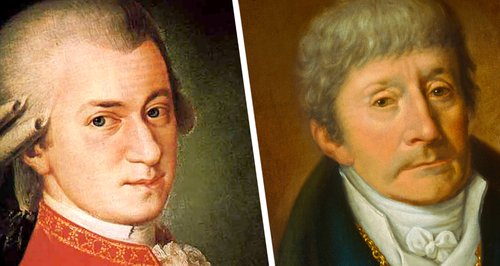 Everyone likes to think of Mozart and Salieri as huge rivals, but it turns out they actually wrote a cantata together.

A discovery in the Czech National Museum has called into question the long-debated rivalry between Wolfgang Amadeus Mozart and Antonio Salieri: a score for a cantata, apparently written together by the two composers.

A spokesperson for the museum, Sarka Dockalova, told AFP that the opera was “a really valuable work... long thought to have been lost.”

“It's a joint composition by Mozart and Salieri, a libretto by Lorenzo Da Ponte put to music.”

Scholars remain disdainful of the notion that Mozart and Salieri were rivals, a legend that has gained traction thanks to the composers’ portrayal in the film Amadeus.

Persistent rumours also include Salieri’s supposed role in Mozart’s death - some believe that the elder composer poisoned Mozart in a fit of jealousy over his prodigious talent.

Now that it's been discovered, someone has inevitably recorded it: