Why do conductors always conduct ahead of the beat? 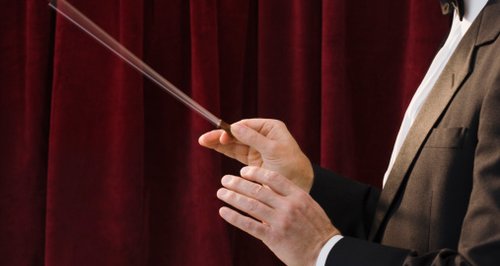 There’s a bit of a phenomenon in professional orchestras (nope, you weren’t just imagining it) that the conductor always places their downbeat just before the musicians need to play their note. But why do they do it?

Check out Mirga Grazinyte-Tyla conducting the LA Phil at the Hollywood Bowl:

Now watch it again, paying more attention to her downbeat. Did you notice her beat is slightly ahead of the orchestra’s?

Hers is subtle, to be fair. If you didn’t notice it, check out Masato Usuki conducting Beethoven:

It looks a bit odd, right? But although the audience will mostly never notice, this is fairly standard practice among professional conductors.

The most common argument for this practice is that it gives conductors the chance to let the musicians know what’s going to happen next.

Reddit user Tascher recalls one of Leonard Bernstein’s conducting classes, in which he argued that the conductor should be “reeling in the orchestra rather than acting as a metronome”.

The way to do this, he says, is to “obviously indicate what he wants before it is played”.

So, beating ahead gives the musicians the chance to follow the conductor’s instructions with a bit of warning.

By the time they’ve played in the orchestra for a while, they will adapt to the hasty downbeats.

Others disagree with this explanation. The Strad say “conductors often urge orchestras not to play behind their beat, but players, though they may respond by looking more attentive, often continue to lag. Some conductors interpret this as incompetence or insubordination.”

However, it seems a *tiny* bit rash to assume that a lot of professional musicians just can’t keep tempo.

Plus, if this were true, why wouldn't it be the same for amateur orchestras? Yet amateur orchestra conductors tend more typically to conduct on the beat, to act as a clear metronome for the musicians (Bernstein wouldn’t like it, but hey-ho, it’s good to be in time).

It seems like the most logical argument for beating ahead is that conductors can anticipate how they’re about to direct their musicians. It does sort of make sense that if someone’s going to tell you to suddenly you to do a massive fortepiano, it’d be nice to have a couple of seconds’ warning.

We like cellist Yvonne Caruthers’ analogy on Quora: “Some conductors choose to conduct well ahead of the orchestra. I think a good analogy might be that of a pace car in a race. It starts in front, it stays in front, and as long as the distance remains roughly the same, both the pace car and whatever’s following it do their job well.”

For more conducting tips and tricks, watch our interview with Simon Rattle: