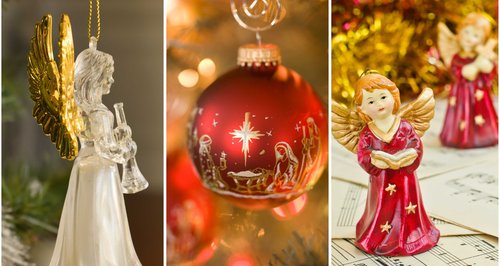 From ‘O Little Town of Bethlehem’ to ‘Gaudete’, here are some of the most beautiful Christmas carols ever written.

From music lovers and churchgoers, to people all around the world who celebrate Christmas, carols are the beloved musical backbone of the festive season.

But what are the best carols ever written?

We’ve donned our Christmas hats and found the most enduring Christmas carols, and the most beautiful performances of them.

Placide Cappeau, a wine seller from southern France, was asked by the local parish priest to write a festive poem in 1847 to celebrate the church organ’s renovation. Cappeau felt it should be accompanied by music, so approached his friend Adolphe Charles Adams. Adams’ text reflects on the birth of Jesus and of humanity’s redemption.

Originally written in German, ‘Stille Nacht’ was composed in 1818 by Franz Xaver Gruber with lyrics by Joseph Mohr, and was translated to English in 1859. During the Christmas truce of 1914 during World War I, the carol was sung simultaneously by English and German troops.

Read more: What are the lyrics to ‘Silent Night’, and what is the story of the Christmas carol?

Based on a poem by the English poet Christina Rossetti, this carol was written sometime before 1872 in response to a magazine request for a Christmas poem. The poem became recognised as a carol after it appeared in The English Hymnal in 1906, with music by Gustav Holst.

Read more: What are the lyrics to ‘In The Bleak Midwinter’ – and which version is better?

Nothing says ‘Christmas’ like a choral arrangement of ‘In The Bleak Midwinter’. But which one should you choose? There’s the popular version by Holst, or an arrangement by choral whizz Bob Chilcott – but you’re probably most likely to hear Harold Edward Darke’s setting. The choir of King’s College, Cambridge use it every year at Christmas.

With lyrics written by Charles Wesley, and set to a tune by Mendelssohn, this carol was always going to be one of the most recognisable and popular ones on the list. It’s also got a cracking descant.

It is unclear who first wrote the music or lyrics to this hymn. Possible candidates include King John IV of Portugal and John Francis Wade, while composers Handel and Gluck have been suggested as the brains behind the melody. The hymn also features in the 1992 film Home Alone 2: Lost in New York, when it is played by a symphony orchestra at Carnegie Hall.

Read more: What are the lyrics to ‘O Come All Ye Faithful’?

Sung at both Advent and Christmas, this hymn originates from Latin but was translated to English in 1861. The music for the hymn was composed in such a way that both the English and Latin words can be used interchangeably.

This carol can be traced all the way back to 16th-century England. The lyrics refer to the ‘Massacre of the Innocents’ by King Herod, who in an attempt to ensure the death of the baby Jesus, ordered the death of all male children under the age of two in Bethlehem.

Following a pilgrimage to the Holy Land, Rector Phillips Brooks wrote the text to this hymn after he was inspired by the view of Bethlehem from the hills of Palestine. Three years later in 1871, his church organist Lewis Redner wrote the melody for the local Sunday school children’s choir.

10. It Came Upon a Midnight Clear

The lyrics for this carol were written by Massachusetts pastor Edmund Sears and refer to ideas of war and peace. The most common musical setting was adapted from an English melody in 1874 by Arthur Sullivan.

11. Once in Royal David’s City

Believed to have first been published in the early nineteenth century, this carol paints a vivd picture of the nativity. The words were first written by children’s poet Mrs Cecil Frances Alexander, who is remembered for her hymn ‘All Things Bright and Beautiful’. The carol was set to music a year later by organist H.J Gauntlett.

This carol is a mixture of both German and Latin text, and dates back to the Middle Ages. Many composers have since been influenced by its melody, including Johann Sebastian Bach, Franz Liszt with his piano suite Weihnachtsbaum and Gustav Holst. And of course, there’s Mike Oldfield’s unforgettably jaunty version…

Rather than celebrating the birth of Christ, the text of this hymn represents Christ’s triumphant return. The words, dreamed up by English writer Isaac Watts, are based on the second half of Psalm 98 in the Bible. In the late ’90s, it was named the most-published Christmas hymn in North America. You can just feel the merriness pouring out of it.

One of the oldest Christmas carols on the list, this dates back to at least the 16th century, possibly earlier. Although most people assume the first line is suggesting merry gentlemen should rest, in early English it actually means something closer to ‘remain bountiful, gentlemen’.

This late 19th-century carol is hugely popular with children. The melody was originally composed in 1837 by Jonathan E. Spilman, but was later adapted in 1895 by William J Kirkpatrick.

First composed in 1684, ‘Sussex Carol’ earned its name when Ralph Vaughan Williams set the text to music in the late 1800s, after he heard it being sung near Sussex.

A carol which celebrates the piping of a shepherd boy on his way to see the baby Jesus at Bethlehem, this represents everything festive about John Rutter. The melody is sprightly, syncopated and rhythmically taut, and Rutter composed it when he was just a school boy.

Written in 1857 by Peter Cornelius, this carol is designed so three male voices can sing a verse each to correspond with the three kings. The Choir of King’s College, Cambridge do it magnificently.

This carol represents the moment in the Bible when Angel Gabriel visits Mary, and declares she is to bear the son of God. The text quotes the Gospel of Luke, while the melody is taken from Basque tradition.

‘Jesus Christ the Apple Tree’ could allude to either the apple tree in the Song of Solomon – often interpreted to mean Christ himself – or to the tree of life, mentioned in Luke’s Gospel. Its author and intended use are unknown, but the song is now performed as a carol by choirs around the world during Christmas season.

The oldest carol on the list, ‘Gaudete’ is thought to have been composed in the late 16th century – but its melody might even date back to the Middle Ages. Its Latin words simply translate as ‘Rejoice, Jesus is born from the Virgin Mary! Rejoice!’. Here is a brilliantly pulsing performance from The King’s Singers...

This gentle carol is inspired by the hope that singers would survive the difficult winter months like the holly and the ivy. Now, they are brought inside for good luck.

Apart from its urgent, catchy melody, its recent popularity is probably down to an arrangement by John Williams written for the 1990 Christmas staple Home Alone. Here’s Katie Melua and the Gori Women’s Choir with the original 1914 Ukrainian version, ‘The Little Swallow’.

24. See Amid the Winter’s Snow

Also known as ‘Hymn for Christmas Day’, this 19th-century English carol was written by Edward Caswall with music by Sir John Goss, an organist at St Paul’s Cathedral and a professor at the Royal Academy of Music.

With celebratory bell-ringing and a cheery chorus of ‘Gloria’s’, it’s near impossible to dislike this wonderfully festive carol. The tune first appeared as a secular dance tune, in a book on dance written by Jehan Tabourot.

John Rutter’s music is always popular at this time of year, and after hearing the soaring melodies of the Candlelight Carol, it’s easy to see why.

This hearty carol is based on the life of Wenceslas, Duke of Bohemia, who became a martyr after being killed by his wicked brother, Boleslaw the Bad. Wenceslas’s body lies in St Vitus’s Cathedral, Prague, and he was recently made a patron saint of the Czech Republic.

28. Angels From the Realms of Glory

Written by Scottish poet James Montgomery and first printed on Christmas Eve 1816, this carol sounds just as beautiful today as it did almost 200 years ago.

There's a misconception that ‘The First Noel’ is French, because of the spelling of ‘Noël’. But it is actually of Cornish origin, with most hymn sheets opting for the old English Anglo-Saxon spelling, Nowell.

With lyrics by 17th-century poet Robert Herrick, John Rutter composed this carol for the choir of King’s College, Cambridge for a performance during the college’s Festival of Nine Lessons and Carols, which is broadcast around the world on Christmas Eve.

Join us throughout December on Classic FM for blissful and uplifting Christmas carols. Plus, listen to our Classic FM Christmas live playlist on Global Player.