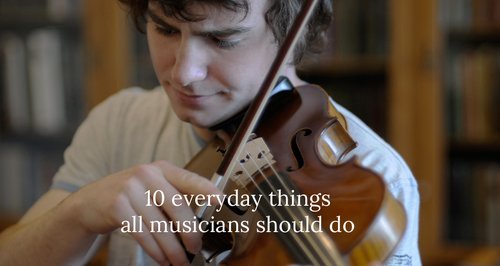 Incorporate these into your daily life as a musician, and you'll soon see the benefits.

Play something
Anything. Obviously your practice regime has to come first and you should strive to adhere to it every day, but on those days when you just can’t fit it in, run your fingers over your laptop case as if it was a keyboard. Use your pen as a makeshift fingerboard. Pick up the ornamental ukulele in your local watering hole. Do something musical and don’t lose momentum. It all adds up.

Listen to something closely and think about it
Some people listen to music to escape. That’s not you. Sure, your recreational listening will often be passive, but it’s important to make time for listening super-closely to a piece you like. Or a piece you hate. What works about it? How does it work? Why is it awful? Pinpoint actual reasons and opinions. Without realising it, you’ll apply it to your own playing.

Show up early
We can’t all be the star. When you’re one of the hired hands, you need to be just that - hired. And those who turn up early, get the job done with the right attitude and do it well are the ones who get hired. Look over the scores you’re about to play, say hi to the people you’re playing with or just take a minute for a cup of tea - getting early means you start rehearsal in the right frame of mind.

Hone your practice regime
There’s more to practicing than just running through the pieces you’re playing at your next lesson. Much more. Make sure you’re hitting your key weaknesses systematically, make sure your scales are seamless - do the technical stuff before you leap into that Brahms sonata. It’ll be worth it in the long run.

Network
Fear not, socially awkward musician person. Everyone struggles with the concept of networking (except those that just do it naturally… oddballs…), but think of it as a necessary dance. You get your name out there, you meet some other musicians in the same boat and hey, you might get a gig out of it. Use your online and offline contacts to your best abilities, stick around after shows and slot yourself into

Plan
While it’s tempting to play up to the stereotype of the disorganised and scatterbrained musician, in practical terms it’s a drag. Opportunities don’t come along because you forgot you were supposed to be in rehearsal half an hour ago. Nor do they come in the expensive cab ride five minutes before you’re due to go on stage. Make sure you know where you’re supposed to be at all times, and those in the know will love you forever.

Talk to another musician
It doesn’t count if you live with them. But you can do it online - be connected to the world of musicians around you, and it won’t seem like such a lonely existence. If you’re in an orchestra, this is super-easy, but if you’re a lone wolf then make the effort to ingratiate yourself in the wider musical community.

Google yourself
It’s ok: we all do it. It’s not an ego-massage, it’s a way of checking you’re as visible as you want to be. Whether you’re a steampunk wedding band in Oklahoma or if you trade on your name alone, make sure you come up when you search for those key terms.

Check your bank balance
Not to patronise, but the nature of a musician’s career means that finances can be erratic. Get absolutely on top of your money (or lack of it - it’s all part of life…) by checking your finances every day. Know who owes you money and when they should’ve paid you, know when you’ve been short-changed, know when you owe someone for those emergency Vandoren V12s before that recital the other week. There’s nothing worse than a nasty surprise when you open your banking app, so just accept that you have to be in control.

Check your attitude
This one can be hard. Even the most professional of musicians can have one of those days when everything conspires against them, but the important thing is to try and see through the murk. If you’re having the worst possible gig or that passage is simply refusing to fall under your fingers - KNOW that things will improve. Because they will.