‘Let It Go’ is one of the most popular Disney songs, it was the fifth best-selling song of 2014, and the music video has well over a billion views on YouTube. But what makes it so great? We decided to look into the music theory behind Frozen’s blockbuster power ballad…

Setting the scene for you

For the very few people who haven't seen Frozen multiple times and know the plot by heart, the song comes at the end of Act I of the film, when Elsa has just run away from her own coronation and set off an eternal winter in her town, Arendelle. She feels isolated, yet frustrated with the outside world who all appear to be terrified of her icy powers.

Let’s start with the opening

The opening of the song is at the bottom of singer Idina Menzel’s two-octave range, scooping down to an F3. The lyrics are mournful, and lead us to believe that this will be a ballad about loneliness and regret.

Although the main body of the song is in A flat major, the first verse begins in the relative minor of F. Elsa is sad and alone, feeling tormented by her ‘swirling storm inside’.

The pitch rises and the lyrics become more determined in the second verse. Elsa doesn’t care about pleasing everyone anymore, she just wants to be herself, icicles and all. “Well now they know!” she cries on a long, triumphant A flat – her highest note in the song so far.

“LET IT GOOO!” And we’re in. The A flat major key takes over, Elsa starts shooting icicles from her hands and for the first time in the song, she smiles.

The melody rises alongside her confidence, and we’re right there with Elsa on her journey.

Sure, she’s rejecting her whole town – but they practically kicked her out when she set off the eternal winter (which she doesn’t actually know until her sister Anna tells her later in the film). So she probably deserves a moment or two to herself.

Let’s talk about the chorus

There are only three notes in the main refrain, yet the close intervals are what make the tune so catchy and easy to remember.

The chorus (like the rest of the song up until this point) is also in constant climax. The second line climbs higher than the first, with the third building right up to the E flat. Finally, Elsa brings out that angsty teenage line, “the cold never bothered me anyway” – which is when the melody moves down to mirror her give-a-damn attitude.

But where might we have heard this format before?

That was the chorus of ‘Nessun Dorma’ from Puccini’s Turandot, which was also written with a melodic build-up from the first to third lines, falling back down on the fourth line. These songwriters and their tricks…

The pace is important

The whole song is a pacy allegro at 137 bpm – an unexpectedly fast pace for a power ballad.

As the percussion joins after the first chorus on the second and fourth beats of the bar, the energy suddenly picks up. The crotchets replacing minims and semibreves in the bass mean the quadruple meter no longer makes the song feel like a ballad:

Here’s when Elsa’s power steps up a notch

“And the fears that once controlled me can’t get to me at all” ends on a lovely B flat chord, which is totally uplifting with the dominant seventh added.

Then Elsa gets determined. “It’s time to see what I can do, to test the limits and break through,” she says, ending on an almighty six-minim note: “I’m free!”.

When it's time for Elsa to build her ice palace, the instrumental semi-quaver passage (which in itself is quite unusual for Disney) leads into a lyrical melody about Elsa realising her own power and strength. And of course, this moment deserves a new key signature – so the song momentarily acquires two new accidentals and moves into G flat major: 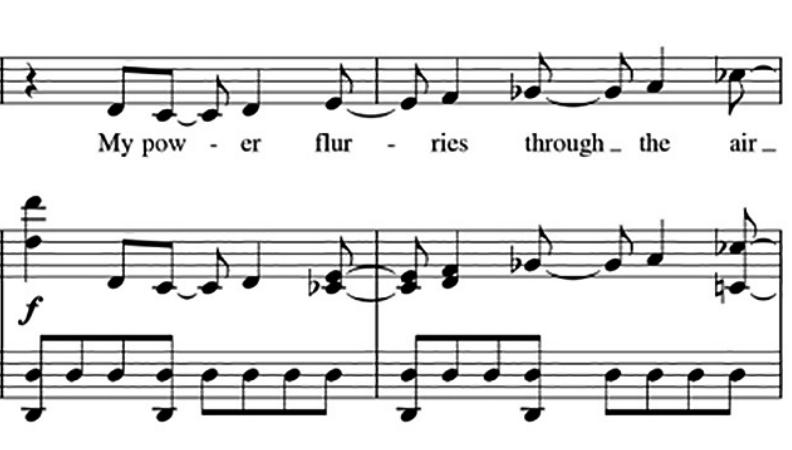 Elsa is a new woman

As Elsa cries “I’m never going back, the past is in the past”, BAM, her tiara is ripped off, her hair falls into a flowing French plait and her fringe whooshes into floaty blonde pieces of loveliness.

She also gets a cracking new sparkly dress.

Holding the D flat on ‘past’ straight through to ‘let it go’ gives the final chorus some epic momentum, which is powerfully emotional next to the heroic animated transformation of Elsa’s hairdo, gown and palace.

Then, the epic belt

It wouldn’t be a Disney showstopper if the soloist couldn’t show off their high notes at the end. Elsa yells “Let the storm rage on!” just to let everyone know that she’s got her inner torment under control. She holds the high E flat for two totally epic, liberating bars.

Could you be feeling ANY more free and empowered right now?! It’s a great song with some inspired use of compositional techniques.