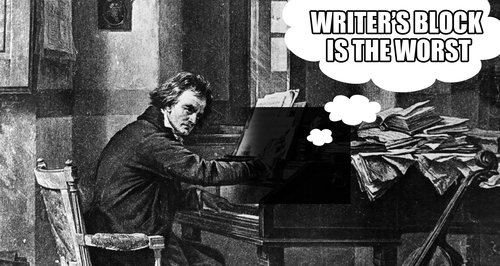 The fear of the blank page plagues composers, authors and artists, no matter how experienced they are. So if you’re struggling with writer’s block, here’s the best advice fellow composers on Reddit had to offer

1. ‘Read as many books as you can about just about anything, well, absorb as many art forms as you can. But for me it's literature. It's an indirect benefit, but I try to read everything from books on happiness and self-help to Aristotle and it just seems to help. It 'expands your mind' in the best possible way.’

2. ‘Don't put focus on being original, or try to perceive how people will react to the piece (worrying whether it's good or not). Your job when composing is to write music, not to be a critic. Criticism and editing can come later, but you can't edit unless you've written something to edit first!’

3. ‘Know the rep and don't be afraid to 'borrow' a few ideas. Don't plagiarise whole melodies obviously but pick and choose now and then if an idea excites you. My two favourite 20th composers are Feldman and Takemitsu, if I hadn't spent time researching their music, my compositional style would be much worse off for it.’

4. ‘Write pastiches, this is how I ended my last block. I love Beethoven and Mozart and sometimes I get frustrated that I can't just do what they did, or not without being known as a pasticher and not a 'serious composer'. But I can write that stuff just for fun, I'm writing a classical-ish piano sonata now and it's the most fun I've ever had composing.’

5. ‘My best solution to something like this is just wait. After listening to enough music and thinking, I find that melodies spontaneously appear. Big problem is usually I don't have my music notebook around when this happens, so those melodies (which happen to be the best and most complex ones) are gone.’

6. ‘That's a problem I have all the time - what stops you from composing sometimes isn't the lack of ideas per se, but rather that you've set your own expectations so high that you don't know where to start.’

7. ‘Try to derive other themes from that same melody. or find something new that goes along well in the same strong beats and work on from there...’