The 10 worst things about being a tenor 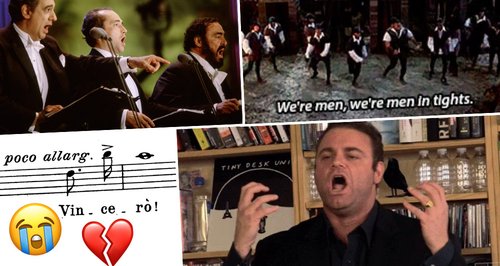 Here's everything that's wrong with being a tenor, from tights to high Cs and everything in-between.

1. Your speaking voice isn’t as impressive as your singing voice

Just because you have the power to wobble the floorboards when you’re singing in front of an audience doesn’t mean you’ve suddenly got the speaking voice of Morgan Freeman. More’s the pity.

You can find Alexander Frankel on Facebook, by the way.

5. Sometimes you just want to play the villain

Oh sure, be the heroic tenor, save the princess, get all the high notes… what if you just want to be evil for once?

6. You need at least two tenor friends if you’re going to make any money

Learn from the masters.

Seriously, it wasn’t funny the first time. You have to stop this now.

8. The looming presence of Wagner

You’re going to have to tackle it at some point. More like ‘hold me, tenor’ than Heldentenor, amirite?

Seriously, why the tights? Can’t we do one of those nice modern interpretations where you get a sharp suit and fake cigarettes?

It’s not a crowd pleaser like treble, not sexy like a bass clef, and doesn’t have the mystery of alto. No-one uses it.