The 10 worst things about being a countertenor 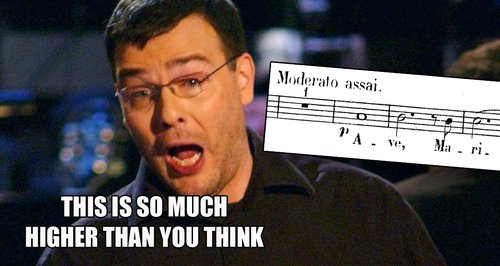 The countertenor should be seen as the most fearless, innovative and daring voice of them all. So why do people think it’s just a squeaky noise?

To which the answer is always, “Because I want to.”

2. Also this question: “Have you hit puberty yet?”

I have satisfactorily graduated from it, in fact. Otherwise me singing at this pitch wouldn’t be that impressive, now would it?

It really, really shouldn’t be. But inevitably, the amount of stigma attached to simply singing way up high makes one defensive.

Yes, in the modern world, it’s curious that it’s only the countertenors who voluntarily undergo horrifying surgery to make a poorly-remunerated living in the arts.

6. Speaking of which, just listen to how a castrati sounds. It's a different thing, people.

So, obviously the countertenor voice can be a beautiful thing when deployed correctly and sensitively, but castrati voices... wowsers. Here’s the last ever castrati singer (and the only one to make a recording), Alessandro Moreschi. Ouch.

7. Making a decision about falsetto

Do I go all fluttery and weak, or do I try and hit that note in my chest voice and risk a massive crack? #realtalk

8. There’s not exactly a huge range of material to pick from

Once you’ve worked your way through Handel and the Baroque period in general, your options are a little limited. Unless you want to start singing everything an octave higher than it was intended.

9. Singing at your natural pitch

When you spend so much time singing high, it does funny things to you.

10. You are not Andreas Scholl or Iestyn Davies

These are the only countertenors anyone in the real world has (maybe) heard of. You are not them.